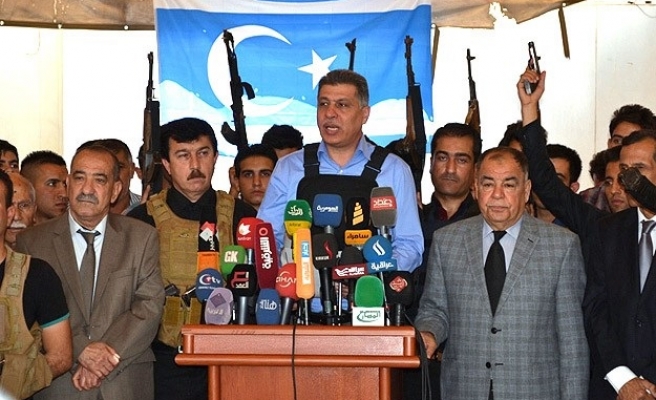 The Turkmen community in Iraq's northern city of Kirkuk have begun to take up arms after militants linked with the Islamic State of Iraq and the Levant (ISIL) reportedly captured the Turkmen-majority city of Tel Afar.

“Turkmens have the right to use weapons to protect themselves and they will do so,” said Iraqi Turkmen Front Leader Ersad Salihi during a press conference attended by armed Turkmen fighters.

Salihi said that necessary measures should be taken immediately as the developments in Iraq were heading toward a sectarian war.

“None of the sides will come out with a victory,” he said. “Iraqi people have suffered, but Turkmens have been the most negatively affected by the recent developments in the country."

Unrest in northern and western parts of Iraq began last week after ISIL militants, along with other armed groups, seized Iraqi northern city of Mosul.

ISIL, which already had control of parts of Syria, has extended its reach into Iraq since June 10, when it seized Iraq's second-largest city Mosul and soon afterwards took near-complete control of the northern Iraqi city of Tikrit.

Iraq has seen a marked increase in sectarian violence between Sunni and Shiite Muslims in recent months, which the Iraqi government blames on ISIL.

Turkmen from Tuz Khurmatu in Northern Iraq have taken up arms on Tuesday to deter militants from the Islamic State of Iraq and the Levant from attacking the city.

The minority Shia Turkmen community from Tuz Khurmatu, which lies south of northern Iraqi city of Kirkuk, fear that Islamic State of Iraq and the Levant (ISIL) militants will attack their town and kill its residents, said Turkmen fighters commander Arjomend Mali.

ISIL captured the Turkmen-majority city of Tal Afar on Monday and Iraqi Army forces withdrew from Tuz Khurmatu with no appointment of replacement Peshmerga forces (Kurdish fighters) made to defend the city while ISIL forces stopped short of two kilometers outside the city.

Mali told Anadolu Agency that "an estimated 1500 youths from the town have arms, and are taking turns day and night to guard the town."

"We found ourselves forced to take up arms since there is no Iraqi Army nor Peshmerga forces," he added.

Mali said that Turkmen in the region of Dakuk and Bashir village, in the Kirkuk district, also remained without protection in the face of ISIL militants.

The Tuz Khurmatu Turkmen are supported by the Iraqi Turkmen Front, led by Ershad Salihi.

“Turkmen have the right to use weapons to protect themselves and they will do so,” said Iraqi Turkmen Front Leader during a press conference attended by armed Turkmen fighters on Monday.

Salihi said that necessary measures should be taken immediately as the developments in Iraq were heading toward a sectarian war.

“None of the sides will come out in victory,” he said. “Iraqi people have suffered, but Turkmen have been the most negatively affected by the recent developments in the country."

Sectarian divisions amongst Turkmen comes on top of the reasons why Iraqi Turkmen-majority areas are easily seized by ISIL militants, the leader of the Iraqi Turkmen Front in Tal Afar, Kassem Kara, told Anadolu Agency.

Kara said that Tal Afar, which has 200 thousand Turkmen residents, 60 percent of whom are Sunni Muslims and 40 percent who are Shia Muslims, fell easily in the grip of ISIL militants after the Iraqi Army withdrew, because " the Turkmen there, were unable to overcome their sectarian divisions and unite around a common goal."

He said that Shia Turkmen of Tal Afar have taken refuge in areas controlled by the Kurdish Peshmerga forces, while the Sunni Turkmen resorted to Mosul, which is currently controlled by ISIL militants.

Kara explained that Tal Afar Turkmen "gave greater importance to their sect more than nationalism, which has led to divisions between the central government in Baghdad and the Kurds, and this situation causes a weakening of the Iraqi Turkmen Front."

Kara also called on the Turkish government to pay greater attention to Tal Afar, saying, "We expect help from Turkey, there is no other country that stands beside the Turkmen. We asked for assistance from Turkey, but it has not yet arrived, and the situation of the people is very bad."