Voters will choose from among 9,012 candidates and the parliamentary election will effectively serve as a referendum on Maliki 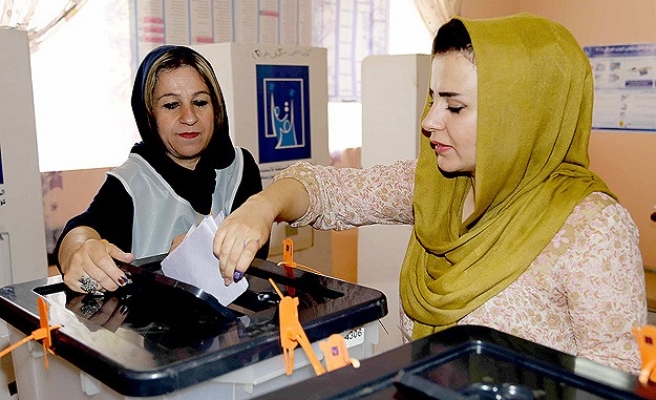 Iraq held a vote to choose a leader with no foreign troops present for the first time ever on Wednesday, as Shi'ite Prime Minister Nuri al-Maliki sought to hold power for a third term in a country again consumed by sectarian bloodshed.

Since the last American soldiers pulled out in 2011 eight years after toppling dictator Saddam Hussein, Iraq has descended back into extreme violence, with hundreds of civilians killed each month by militants.

Voters are choosing from nearly 10,000 candidates for 328 seats in parliament, from political parties that range from Islamists to liberals and communists.

But even more than in the last election four years ago, parties with sectarian and ethnic agendas are expected to lead the field, potentially exacerbating the divisions that underlie the worsening carnage.

Baghdad, a city still carved up with some fortress-like neighbourhoods surrounded by razor wire and giant concrete barriers, is now festooned with political posters of men in suits, traditional robes, clerical garb or military fatigues, and women in glamorous makeup or modest Islamic dress.

But despite the myriad parties, the election is widely seen as a referendum on Maliki, a Shi'ite Muslim who has governed for eight years. He says he is the only politician with enough strength to battle insurgents; his opponents say his bullying of his political enemies has brought Iraq to the verge of collapse.

The past year has seen violence return to levels unseen since the darkest days of the U.S. military "surge" under President George W. Bush. Government forces are fighting Sunni militants across western Anbar province, northern Iraq and in the countryside surrounding Baghdad. Shi'ite militia, once kept in check by Maliki and the Americans, have resurfaced to join the battle.

Two different elections unfolded across Iraq Wednesday: one in predominantly Shi'ite areas of the country, where people were voting for the figure they thought best suited to defeat the Islamic State of Iraq and the Levant (ISIL); the other in Sunni regions and neighbourhoods in Baghdad, where people fear both the Shi'ite-led security forces and ISIL.

In Baghdad, roads were dotted with military checkpoints and people walked on foot to the polling stations.

ISIL, which is leading Sunni insurgencies in both Iraq and Syria, had threatened to kill anyone who votes. At least 12 people were reported killed, including eight blown up by bombers at polling stations in Diyala and Salahuddin, provinces north of Baghdad with large Sunni populations. Four soldiers were killed by a bomb while racing to a polling station surrounded by gunmen.

The most troubled province for the elections was Anbar, where Iraqi forces are locked in a four-month fight with ISIL for the cities of Ramadi and Fallujah. Troops surround Fallujah and are waging street battles in Ramadi.

In Ramadi, people only started venturing to the polls late in the morning. Snipers were perched on the rooftops of schools used as voting centres. Army and police patrolled the streets.

The war in Anbar has displaced an estimated 420,000 people. The Iraqi electoral commission acknowledged it could only hold the election in 70 percent of Anbar, not counting Fallujah.

Sunnis displaced from their homes but still living in Ramadi had to walk across the conflict-ravaged town to polling centres designated for them. Many did not bother.

"There were many threats which kept us from going," said civil servant Baha Qahtan. "All are convinced that this is an absurd game."

In the northern city of Mosul, where ISIL has widespread influence, many people were afraid to vote and some polling stations did not open, said Marwan al-Ani, a professor at Mosul University.

Baghdad itself was quieter than four years ago. Maliki was among the first to vote, at a hotel next to the fortified Green Zone where the government is based. He urged people to follow suit despite security threats.

"I call upon the Iraqi people to head in large numbers to the ballot boxes to send a message of deterrence and a slap to the face of terrorism," Maliki told reporters.

The polls were opened from 7 am to 6 pm and shut with people still waiting to vote. At the designated Baghdad polling centre for journalists, elite SWAT security forces expelled 200 waiting reporters. One officer said: "You are educated people, you are journalists, we respect you. It's better for you to leave or else we will use another way".

There are no accurate opinion polls, but as in past elections, no party is likely to win a majority in parliament. After the 2010 election Iraq was without a government for nine months while Maliki, whose party placed second, constructed a coalition with Sunnis and Kurds to stay in power.

This time, Maliki's State of Law coalition is widely expected to win the most votes, but forming a government may nonetheless once again be difficult. He boasted that the only question would be the scale of his victory.

"Definitely our expectations are high," he said. "Our victory is confirmed but we are still talking about how big this victory will be," Maliki said. Polls close at 6 p.m. (1500 GMT).

Among his fellow Shi'ites, who make up a narrow majority of Iraqis, Maliki is fending off a challenge from opponents who say his war in Anbar is a disaster and he has alienated Sunnis, allowing ISIL to become powerful.

Sunni political leaders paint Maliki as an authoritarian ruler who wants to destroy their community. His main Sunni rival, parliamentary speaker Osama al-Nujaifi, vowed after voting he would never back a third term for Maliki.

"We have set red lines. We will not ally with the current prime minister in any case," Nujaifi told reporters.

As in the past, the balance of power could lie with Kurds, whose parties were persuaded to join Maliki's government four years ago after holding out during months of negotiations.

Maliki, a Shi'itefrom a party that fought underground against Saddam, has become a deeply polarising figure even among Shi'ites. In Baghdad's prosperous, mainly Shi'ite Karrada district, many voters expressed support.

"Maliki can defeat terrorism because ... he has the great asset of the people's support. He has the experience and knowledge," said Mahmoud Sadiq al Rubaie, a labourer.

But Abu Sajjad, a taxi driver in the Shi'ite slum Sadr City, said Maliki's sectarian politics were destroying the country.

"We voted according to our sect and this sectarianism will ruin Iraq," he said. "If Maliki will be reelected, Iraq will be destroyed and things will get worse."

In eastern Baghdad's Sunni neighbourhood of Adhamiyah, security personnel seemed nervous and worried about a bomb as they stopped voters for identification cards. Turnout was high as the Sunni community looked to defeat Maliki.

"If he stays in power, there will be serious deterioration in security," said Ghassan Ghalib Najem, a labourer. "If he wins there will be more blood spilled because the rival parties will not accept his victory."