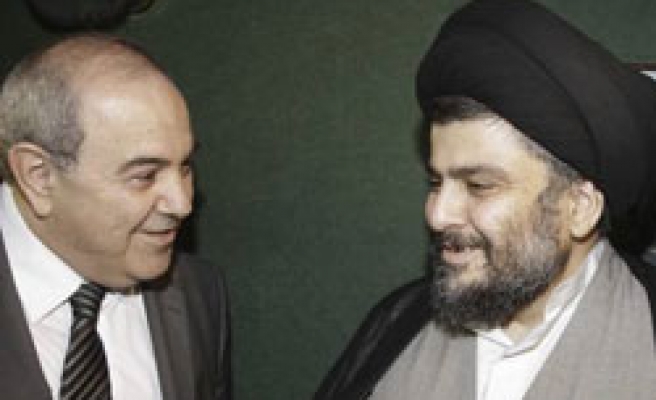 Sadr, an anti-U.S. figure who has emerged as a kingmaker in Iraqi politics, did not endorse Allawi but said Allawi had shown more willingness to compromise than Prime Minister Nuri al- Maliki, who is trying to cling to power after an inconclusive election in March.

Sadr and Allawi met at a hotel in the Syrian capital after they had separately been received by Syrian President Bashar al-Assad. They later met Turkish Foreign Minister Ahmet Davutoglu, who was on a brief visit to Syria.

A bloc supported by Sunni politicians and headed by Allawi narrowly won the most seats.

Allawi was Iraq's prime minister in 2004 when U.S. forces surrounded Sadr and his followers at the Imam Ali shrine in the Iraqi holy city of Najaf before Ayatollah Ali al-Sistani intervened and ensured Sadr safe passage, avoiding a bloodbath inside the grand mosque.

"If there were past differences, I am forgetting them so that the political process proceeds," Sadr told reporters

"I don't back specific names, but programmes and mechanisms to arrive at the next prime minister," he added, saying Allawi had promised him to draft a political programme he would adopt if he became prime minister.

Allawi told a press conference in a Damascus hotel that he and Sadr had agreed on "the need to speed up the formation of a government that would group all the political movements and have a clear programme."

Separately, Sadr told reporters that Allawi's bloc was "ready to make concessions to put an end to Iraq's political crisis," and urged other parties to do the same for the sake of the Iraqi public interest.

Efforts to form a new government, more than four months after a March 7 election in Iraq, also figured in talks in Damascus last Saturday between Assad and Sadr.

The bloc of Sadr, who lives in self-imposed exile in Iran, gained 39 seats in Iraq's new 325-strong parliament, against 91 for Allawi and 89 for Maliki -- both also Shiites.

"Something I am sure of is that the Sayyed (Sadr) will honour his word," Allawi said

An aide to Allawi said he could become prime minister if he secured the support of Sadr and the two main Kurdish blocs.