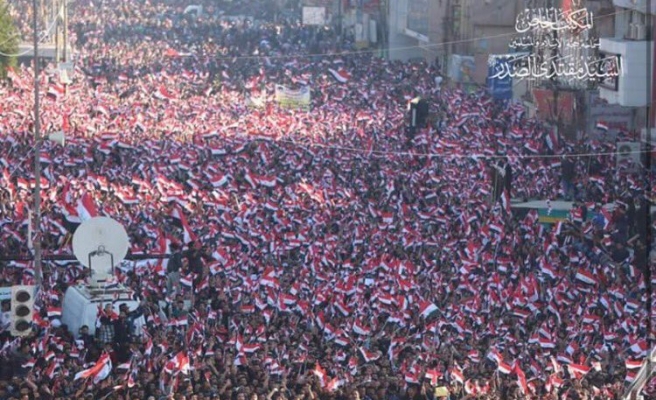 He also condemned the government of Prime Minister Haider al-Abadi, accusing it of failing to resolve Iraq’s chronic security, economic and political problems.

On Feb. 12, al-Sadr gave the authorities 45 days to draw up a non-sectarian-based government of technocrats.

On Friday, he warned that his followers would storm Baghdad’s Green Zone -- which houses government institutions and foreign embassies -- if the deadline passed without the demand being met.

"In a final attempt, I call on all Iraqi political parties to enter into dialogue with the Iraqi people and their representatives to end this… government of corruption," al-Sadr said in a televised speech.

"Everyone must heed the will of the people, including Iraqi politicians, the government and foreign diplomatic missions," he asserted. "We ask them [foreign missions] to remain silent or leave the Green Zone."

Regarding the wave of recent demonstrations held by his followers in Baghdad, al-Sadr added: "Our protests aren’t intended to attack anyone or remove any party or person… we're not demanding authority or influence, but rather to rid Iraq of those who are exploiting its resources and sapping its strength."

On Friday evening, thousands of al-Sadr’s followers demonstrated outside the Green Zone as the government stepped up security throughout the city.

A planned Friday demonstration was meant to protest the al-Abadi government’s failure to carry out promised reforms and eliminate government corruption.