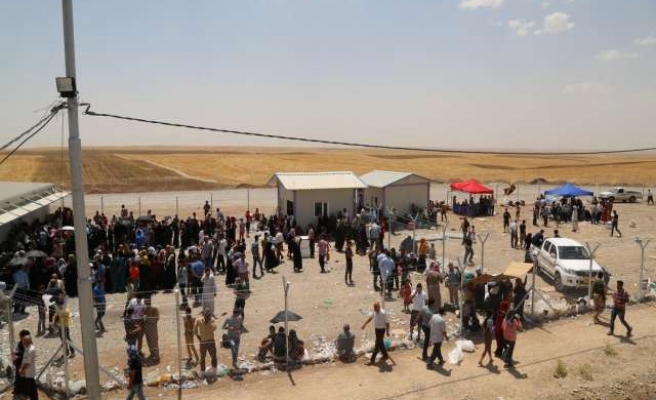 Rebels from an al Qaeda splinter group overran the Iraqi city of Tikrit on Wednesday and closed in on the biggest oil refinery in the country, making further gains in their rapid military advance against the Shi'ite-led government.

The threat to the Baiji refinery comes after militants from the Islamic State in Iraq and the Levant (ISIL) seized the northern city of Mosul.

The fall of Mosul, Iraq's second biggest city, is a blow to Prime Minister Nuri al-Maliki's attempts to defeat the militants, who have seized territory in Iraq over the past year following the withdrawal of U.S. forces.

About 500,000 Iraqis have fled Mosul, home to 2 million people, and the surrounding province, many seeking safety in the autonomous Kurdistan region. Insurgents are now in control of between 10 and 15 pct of Iraqi territory, excluding Kurdistan.

"Our forces were caught by surprise, they never expected ISIL would use police and army Humvee vehicles, we mistook them for government forces and it was too late to stop them," said a police captain who fled from Tikrit to Samarra.

"We are fighting devils and not ordinary people".

Foreign Minister Hoshyar Zebari said Iraq's leaders must unite to face a "mortal" threat. "There has to be a quick response to what has happened," he said during a trip to Greece.

Zebari said Baghdad would work with forces from Kurdistan in the north to drive the fighters out of Mosul after they put Iraqi security forces to flight on Tuesday.

In a show of the militants' reach, a car bombing in a crowded market in the town of Safwan, which sits on Iraq's southernmost border with Kuwait, killed five people.

Maliki described the fall of Mosul as a "conspiracy" and said those who had abandoned their posts would be punished. He also said Iraqis were volunteering in several provinces to join army brigades to fight ISIL.

In a statement on its Twitter account, ISIL said it had taken Mosul as part of a plan "to conquer the entire state and cleanse it from the apostates", referring to the province of Nineveh of which the city is the capital.

Around 80 Turkish citizens seized in two separate incidents in Mosul were being held hostage by the militants, the foreign ministry in Ankara said.

Militants executed 10 soldiers and policemen on Wednesday near the town of Riyadh, 60 km (40 miles) southwest of Kirkuk, after setting up a checkpoint on the road, police sources said.

ISIL's advances show that Iraq's security forces - trained and equipped by Washington at a cost of nearly $25 billion and numbering more than a million - are outmatched against insurgents who once took on the might of the United States.

Overnight on Tuesday, ISIL militants moved on Baiji, home to Iraq's largest refinery, which can process 300,000 barrels per day and supplies oil products to most of Iraq's provinces and as well as Baghdad.

Security sources said the fighters drove into the town of Baiji in armed vehicles, torching the court house and police station before freeing prisoners.

The militants later withdrew into surrounding villages after tribal leaders persuaded them not to take over the energy installations in Baiji, local officials and residents said.

In Sadr city, a Shi'ite slum in Baghdad, men were stockpiling weapons in anticipation of a battle against ISIL.

"The army has proven to be a big failure. People have begun to depend on themselves because ISIL may enter Baghdad any minute," said Muhannad al-Darraji from Sadr City.

At about the same time, a suicide bomber blew himself up in Sadr City, killing at least 18 people. A further 11 people were killed when a car bomb exploded near the northern Kadhimiya district, where there is a Shi'ite shrine.

The governor of Mosul blamed Maliki for failing to act upon his warnings about the threat of ISIL.

"The entry of ISIL to Mosul was through the desert from Syria," Atheel al-Nujaifi said. "There are camps in the desert and we have repeatedly asked the government to bomb these camps instead of luring ISIL into the cities to fight it."

At a checkpoint on the road between Mosul and Arbil, residents who fled with little more than the clothes on their backs were stunned by the turn of events and did not know what to make of their city's new occupants.

A 40-year-old man who fled the city with his family said: "We are frightened because we don't know who they are. They call themselves revolutionaries. They told us not to be scared and that they came to liberate and free us from oppression."