ISIL freed some members of Iraq's Yazidi minority, delivering them to safety in the country's Kurdish north. 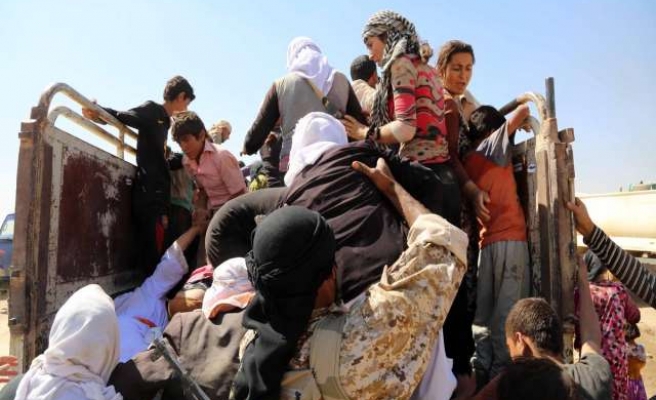 Around 200 Iraqi Yazidis, mostly comprising the elderly and children who were kidnapped in the northern town of Sinjar by the ISIL about six months ago, were released by the group on Saturday, officials said.

198 Yazidis, who were kidnapped by ISIL after it seized Sinjar in August 2014, were released in the peshmerga-controlled area of Mektep Halit, 30 km away from the northern province of Kirkuk.

The released hostages were allowed into the province only after a security check upon the order of Kirkuk Governor, Najmaldin Karim, due to concerns of a possible infiltration by ISIL militants, officials told The Anadolu Agency.

Almost all those released were elderly, disabled, or unwell, and included several infants with serious illnesses, according to a Reuters reporter who saw them.

The freed Yazidis were undergoing a medical examination in the town of Altun Kupri, the officials said.

"They (the Yazidis) will spend the night here (in Altun Kupri). We will send them back to their families in Dohuk tomorrow (Sunday)," Irbil Governor, Nawzad Hadi said.

Kirkuk Police Chief Serhat Kadir claimed that the Yazidis were released after the payment of an $850,000 ransom.

"These people were released upon the payment of the ransom demanded by ISIL. The ransom was paid by businessmen from Irbil and Kirkuk, who, along with tribal leaders, had been working for about a month to ensure the release of women and children," he said.

One of the freed Yazidis, who was in his 70s, said fighters had ordered them to get into buses on Saturday, and they feared they were going to be executed.

Instead, they were driven to the ISIL-controlled Shirqat area, where they spent the night, and from there to Hawija at the southwestern entrance of Kirkuk.

Sinjar, which is home to many Ezidi Kurds, had fallen to ISIL on Aug. 3, 2014, when the peshmerga withdrew from the region. Around 30,000 Yazidis fled to Mount Sinjar following the town’s capture. Of this number, 20,000 were transferred to the province of Dohuk through a safe corridor along the Syrian border.

ISIL's weeks-long siege of Mount Sinjar was broken on Dec. 20, 2014 after a successful operation of Iraqi peshmerga, backed by the U.S.-led international coalition. The victory came after three days of clashes in the town of Sinjar.

The number of missing women, including those kidnapped by ISIL, has hit 2,500, while 300 women abducted by the militant group have been freed, according to an Iraqi government report issued in December 2014.

The same report revealed that the death toll of Yazidis and Turkmen from ISIL violence reached 6,000, and a million people including 400,000 Yazidis and 600,000 Turkmen fled from their homes.

It is estimated that there are still around 10,000 Yazidis trapped on Mt. Sinjar, and the Iraqi government has been sending humanitarian aid to the region with helicopters.

Iraq has been in a security vacuum since June, when ISIL overran Mosul and declared what it called a caliphate in parts of Iraq and Syria.