The parties have publicly sparred over how the negotiations will unfold, with an Israeli official saying all issues would be discussed simultaneously and a Palestinian official saying they would start with borders and security. 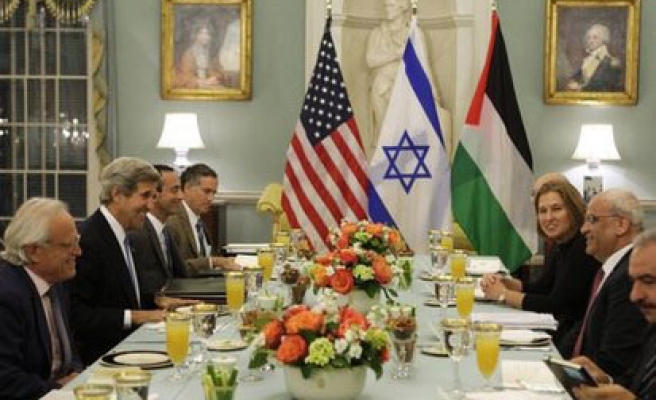 Israeli and Palestinian negotiators held their first peace talks in nearly three years on Monday in a U.S.-brokered effort that Secretary of State John Kerry hopes will end their conflict despite deep divisions.

Top aides to Israeli Prime Minister Benjamin Netanyahu and Palestinian President Mahmoud Abbas began the talks over an iftar dinner - the evening meal with which Muslims break their daily fast during Ramadan - hosted by Kerry at the State Department.

Kerry, who has prodded, coaxed and cajoled the two sides to resume negotiations in a flurry of visits to the Middle East during his less than six months in office, urged Israelis and Palestinians to strike "reasonable compromises."

It was clear, however, from some public statements over the agenda for the talks - which are expected to run for nine months - and comments by Abbas, that there are major disagreements over issues such as borders and security.

"It is no secret this is a difficult process. If it were easy, it would have happened a long time ago," Kerry said with his newly named envoy for Israeli-Palestinian peace, former U.S. Ambassador to Israel Martin Indyk, at his side.

"Many difficult choices lie ahead for the negotiators and for the leaders as we seek reasonable compromises on tough, complicated, emotional, and symbolic issues," Kerry added.

The talks started over dinner with Israel represented by Justice Minister Tzipi Livni and Yitzhak Molcho, a close aide to Netanyahu, and the Palestinians by chief negotiator Saeb Erekat and Mohammed Ishtyeh.

As the sides came together in Washington on Monday Kerry met separately with each, starting with the Israelis, before all came together around the dinner table. Kerry and his delegation of four, including new envoy Indyk, were seated on one side of the table and their guests on the other side, with the two main negotiators Livni and Erekat seated side by side.

"It's very, very special to be here," Kerry told his guests. "There isn't very much to talk about at all," he joked.

The parties have publicly sparred over how the negotiations will unfold, with an Israeli official saying all issues would be discussed simultaneously and a Palestinian official saying they would start with borders and security.

Speaking in Cairo on Monday, Abbas struck a hard line, saying that ultimately he did not want a single Israeli citizen or soldier on Palestinian land. His comments were made despite Kerry's wish that both sides refrain from talking publicly about issues.

Israel has previously said it wants to maintain a military presence in the occupied West Bank at the border with Jordan to prevent any influx of weapons that could be used against it.

"In a final resolution, we would not see the presence of a single Israeli - civilian or soldier - on our lands," Abbas said in a briefing to mostly Egyptian journalists in Cairo.

In an interview with Reuters Television in Washington, Livni voiced some hope about the talks. "It is not a favor to the United States or to the Palestinians, this is something that we need to do," she said.

Middle East analysts praised Kerry for persuading the two sides to resume talks but emphasized the difficulties ahead.

"Right now, there's almost no chance of achieving a conflict-ending agreement; yet by pressing the Israelis and Palestinians back toward the table, the United States has assumed responsibility for producing one," Aaron David Miller, a former U.S. peace negotiator, wrote in a New York Times opinion piece.

"Nobody appears to have a stake in the talks except the United States, and Mr. Kerry," added Miller, who is now at the Woodrow Wilson International Center for Scholars think tank.

The United States is seeking to broker an agreement on a "two-state solution" in which Israel would exist peacefully alongside a new Palestinian state created in the West Bank and the Gaza Strip, lands occupied by the Israelis since a 1967 war.

The major issues to be resolved in the talks include borders, the future of Jewish settlements on theWest Bank, the fate of Palestinian refugees and the status of Jerusalem.

Even Indyk, Kerry's new envoy, who has previously served as the top U.S. diplomat for the Middle East, noted that when Kerry began his efforts this year almost no one thought he would succeed in reviving the negotiations.

"You took up the challenge when most people thought you were on a mission impossible," Indyk said.

The last direct negotiations collapsed in late 2010 over Israel's construction of Jewish settlements on occupied land it seized in the 1967 Middle East war.

Previous attempts to resolve the conflict have sought to tackle easier disputes first and defer the most emotional ones like the fate of Jerusalem and of Palestinian refugees.

The Palestinians, with international backing, want their future state to have borders approximating the boundaries of the West Bank, adjacent East Jerusalem and the Gaza Strip before Israel captured them in the 1967 war.

In what it called a goodwill gesture to restart diplomacy, the Israeli Cabinet on Sunday approved the release of 104 long-serving Palestinian prisoners in stages. Thousands more Palestinians remain in Israeli jails.