A video has been released of the Turks that were kidnapped earlier this month, saying that they have all been released 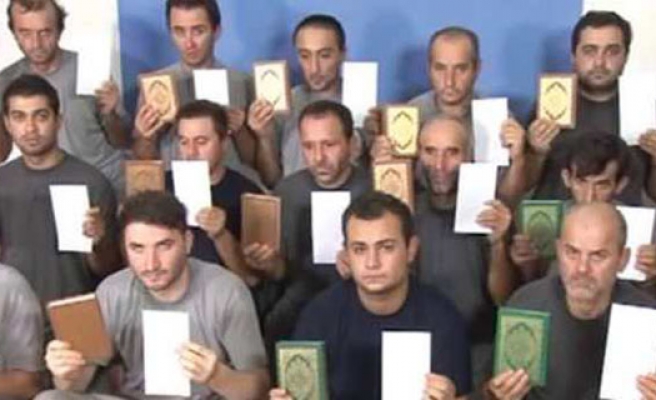 Sixteen Turkish workers abducted in Baghdad earlier this month have appeared in an online video promising their release, days after a U.N.-backed deal to extricate Syrian villagers under siege from rebels supported by Ankara.

The men were kidnapped on Sept. 2 from a stadium they were building on the outskirts of the capital along with two others who were released earlier in the southern city of Basra.

The abductees had appeared in a video days after their capture, apparently held by an armed group that used a familiar slogan and threatened to attack Turkish interests in Iraq if its demands were not met.

The new video released late on Sunday showed the men sitting below the same slogan, clean-shaven and wearing T-shirts.

The video's authenticity could not be verified. Officials in Iraq and Turkey were not immediately available to comment.

On-screen text said the captors had decided to release the Turks after civilians besieged by Sunni insurgents in the Shi'ite villages of Kefraya and al-Foua in northwestern Syria had been given safe passage.

In the video, one of the Turks reads a statement in Arabic, saying the captors had treated them humanely.

"We hope on this holy day of Eid al-Adha that Erdogan will not repeat (his actions) and will respect the innocent people of Iraq and Syria," the man said, referring to Turkish President Tayyip Erdogan. Eid al-Adha is an Islamic holiday which ended on Sunday.

The video closes with a warning against breaking promises. It makes no new demands and sets no timeline for the Turks' release.