KNC collects 16 political parties from where Kurdish people mainly live under its umbrella. 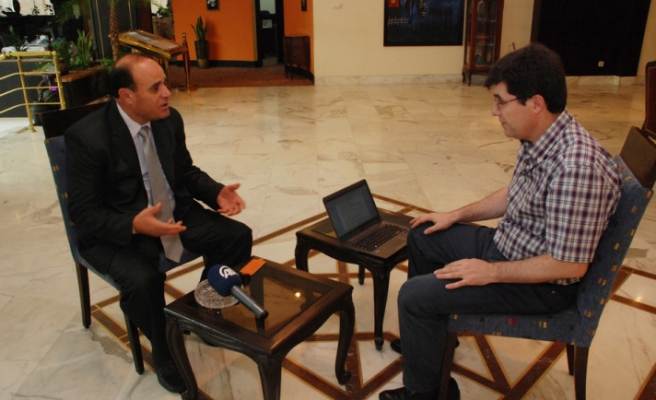 Kurdish National Council (KNC) leader Ismail Hemme has said Syrian Kurdish groups' taking over the control in northern Syria was a tactical plan and a plot.

KNC collects 16 political parties from where Kurdish people mainly live under its umbrella. Ismail Hemme undertook the leadership of KNC a short while ago.

Giving a statement to AA about the latest developments in Syria on Wednesday, Hemme said that Kurdish people only protest the regime by joining the street protests and they avoid using guns.

"Al-Assad's not stepping into the Kurdish areas does not mean he is not caring," said Hemme.

"The first reason that he is not stepping in is because all the Kurdish towns are on the Turkish border. If he did the same thing where we live, then there would be immigration of 100 thousands. At the beginning of the reforms, Turkey said that if there was high number of refugees coming in, they would create a safe zone on the Syrian soil. Al-Assad was worried and scared about the future problems between Turkey and Syria, then he did not want to cause such thing," Heme said.

The leader of the KNC said that the other reason that Al-Asad's regime is not stepping in is because he wanted to reflect the problems between the community and him as "Sunni-Alewi conflicts" or some groups' trying to take control of the governance.

Hemme also claimed over the issue of Kurdish groups' taking control of some areas in northern Syria and stressed, "I think that situation was an operation, a game played by Al-Assad. He only recalled one of the security guards from Kurdish based area's government agency. It was a tactical plan, plot. Al-Assad wanted the community, countries around and Turkey to think that "You see, if I leave, Kurds will control the Kurdish based zones." He also wanted Arab countries to play off against the Kurds, and support him so he could say, "If I leave, Syria will be split."

Hemme added that media exaggerated the situation in northern Syria and said that contrary to what is known, Syrian forces had never left the area and stated, "For example, they emptied some places themselves. However, the power of the regime is still active in our zones and still powerful. Syria is patrolling our area with 4 different security units."

Moreover, Hemme added that Al-Assad's regime is busy with the opposition in Damascus and Aleppo and said, "If Al-Assad gains control there, he will come over to the Kurdish based region."

Hemme said that, from the first day of the Syrian uprising they made "unity of Syria" their motto and stated, "I say it with honesty that Syrian Kurds have never thought about splitting the country, never thought about the other religion in Syria neither being a trouble for neighbour countries. There are no conflicts in our zones and we can protect our region. We might become allies with the Free Syrian Army in order to protect our region."

After AA correspondent reminded him that Turkey will not be quiet and step in if PKK-affiliated Kurdish Democratic Union (PYD) goes through a reorganising, Hemme said, "There is not a situation that Turkey will step in. We do not presume that Turkey will step into the region. However, if Turkey comes in because of not quite right situations, then Syrian people will not be happy. We would like to keep a good relationship with Turkey. If he accepts, we would like to come together with Turkish Foreign Minister Ahmet Davutoglu too. We asked Iraqi Kurdish leader Massoud Barzani to let Davutoglu know about what we would like to carry on with. We do not want to see Syria being split and we work hard for setting up a democratic governance for Syria."

Lastly, Hemme stated that they are still holding negotiations for cooperating with Syrian National Council (SNC), there are tiny controversies however he said that they are close to form cooperation.

PYD and KNC are the two strongest organizations in northeastern Syria where Kurdish population increases. It was stated that differences in both opinions were solved at the meetings attended by Barzani last month in Irbil. A couple days after the meetings in Irbil, these two groups took over the control of Kurdish region in Syria and Al-Assad's government did not react against groups.