Barzani will meet Shamkhani, the secretary of the Supreme National Security Council of Iran, to discuss the 'terrorist attacks' in Iraq and Kurdish region of the country. 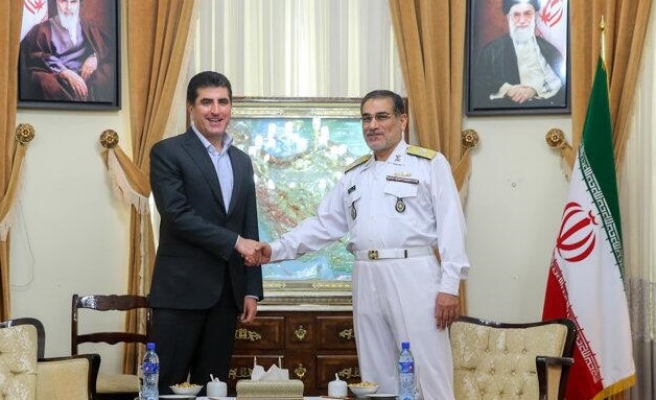 Barzani is due to visit Turkey as well, following his visit to Iranian capital Tehran, sources claimed.

Barzani will meet Ali Shamkhani, the secretary of the Supreme National Security Council of Iran, in order to discuss the "terrorist attacks" in Iraq and Kurdish region of the country, the official news agency IRNA of Iran reported.

A Deputy Foreign Minister of Iran Hossein Amir-Abdollahian said they would speak about ways to help the Baghdad government to overcome the crisis in the country.

Unrest in the north and west of Iraq began last week after the militant group Islamic State of Iraq and the Levant 'ISIL', along with other armed groups seized the city of Mosul in northern Iraq’s Nineveh province.

Iraqi Kurdistan wants up to a quarter of Iraq oil revenue

The Kurdistan Regional Government believes its share of total Iraqi oil sales should be as high as 25 percent, the KRG's official spokesman said on Monday.

It argues budget cuts from Baghdad had driven it to pursue independent oil sales outside the federal government's control.

Safeen Dizayee, the former foreign affairs and education minister for the KRG, now the autonomous government's official spokesman, said that while under existing agreements Arbil is supposed to receive 17 percent of Iraqi oil revenues, the total figure should be far higher based on its growing population and rising oil output.

"The figure should be far higher and indeed when the censuses are conducted we believe it could average 25 percent," Dizayee said from his office at the Council of Ministers in Arbil.

"The 17 percent was just an estimate that was used. But even now we don't receive that. This year we were getting only about 10.5 percent of the total Iraqi budget."

The Baghdad's government collapse in the north has allowed forces of the ethnic Kurdish autonomous region to advance, seizing the long-disputed city of Kirkuk and rural areas with vast oil reserves.

As Iraq struggles to stop an insurgency by Islamist militants, Kurdistan is ramping up independent oil exports, with a third tanker set to load a cargo of crude from Turkey's Mediterranean port of Ceyhan on June 22, Turkish Energy Minister Taner Yildiz said on Monday.