Kurdish and Turkmen farmers from Kirkuk villages whose lands are slowly being taken over by Saddam-era Arab settlers protested on Tuesday in front of the acting governor’s office in Kirkuk, demanding for their rights be preserved. 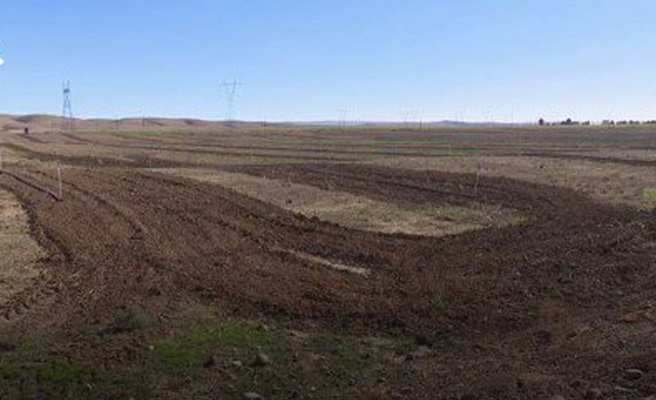 Kurdish and Turkmen farmers from Kirkuk villages whose lands are slowly being taken over by Saddam-era Arab settlers protested on Tuesday in front of the acting governor’s office in Kirkuk, demanding for their rights be preserved.

Some 200-300 Kurdish and Turkmen farmers gathered in front of the Kirkuk governor's office on Tuesday to protest against the resumption of Arabization policies targeting their villages and lands.

"We as the Matara village are here today demanding our rights. Our village is utterly occupied. Even one meter of land is not left for us. In the Talaban area, no village is as deprived as ours. Nothing is left for us,” a protestor told Rudaw.

The Talaban area is the historical homeland of the Talabani family who control the PUK.

Since the events of October 2017, locals have claimed the Iraqi government has restarted the Arabization policies of the previous regime. Locals are unable to return to farm or visit their lands.

The protestor claimed the settler Arabs had enlisted the Hashd al-Shaabi paramilitaries and are backed by Hadi al-Amiri’s Badr Organization. The groups have rifles and openly threaten Kurdish landowners.

“We can't even go check out our land, houses, belongings. All are occupied. This is our condition. We ask for a solution,” he implored.

The same Arab families were brought in by Saddam's Arabization policies of 1974 and 1975, he added.

"This governor finished what Saddam Hussein didn't finish," he said, adding nothing like this has been done previously.

The status of Kirkuk is disputed and claimed by Erbil and Baghdad. A referendum to decide its fate has not been implemented since the establishment of the new constitution in 2005.

"We as the people of the Shuwan area: Our lands are still ruled by a decision of the Baath government. With the coming of this governor, whatever Baath decision imposed on us should have been repealed; instead they has been re-instated by him again to occupy our lands," Omer, a Kurdish farmer from Shuwan village said.

He explained they do not have problem with the Iraqi government but with current acting Governor Rakan al-Jabouri.

They aren't given seeds, fertilizers, and other agricultural assistance since the governor was installed following the events of October 2017 and ousting of Kurdish Governor Najmaldin Karim.

"We are here demanding our rights," added the farmer.

With Saddam gone, they ran away, but have returned, another farmer said.

"Provide us with a place so we can go and they take over our place. Give our lands to them. Our leaving is better," he lamented, showing old documents apparently proving his land rights.

"Saddam Hussein was better than these people. He would deport you to somewhere and give you a piece of land," he added.
The farmer claimed Jabouri was an accomplice to the Arab settlers and security forces.

Days ago, the Patriotic Union of Kurdistan (PUK) in Kirkuk stated that if the acting governor didn't put an end to the Arabization, they would stir the public into taking action. The PUK accuse Iraqi forces and elements of Hashd al-Shaabi of actively supporting the Arabization process.

The protests, however, did not seem to be the making of the political elite.