Displaced Sunni Arabs have borne the brunt of the restrictions. In the past, Arabs wishing to enter the region had to find a Kurd to vouch for them, but now even that is not enough to gain access for some 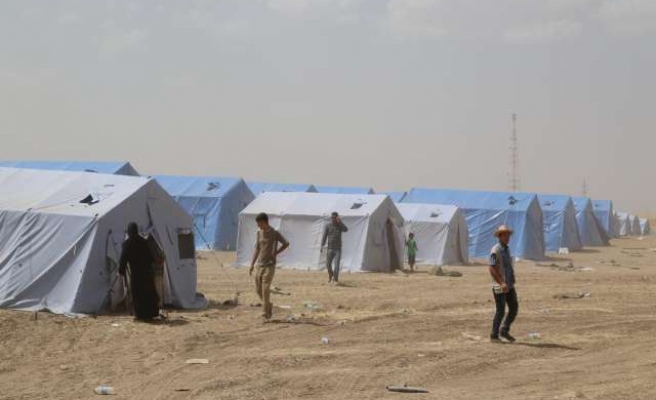 They used to be symbols of an oil-fuelled boom, but the unfinished buildings in Iraq's Kurdish north are now crammed with people fleeing violence in the rest of the country.

Of the two million people displaced by ISIL offensives in Iraq this year, almost half sought refuge in Kurdistan, inflating the semi-autonomous region's population by around 20 percent and putting acute strain on its resources.

The concrete frames of future shopping centres and supermarkets have been wrapped with plastic sheets to shelter their new occupants as winter sets in.

Aid agencies are struggling to provide for the displaced, and Kurdish authorities are tightening controls along their border with the rest of Iraq to prevent more coming, concerned about the threat to the region's own security.

The fear is infiltration of militants, who have been driven back in the north by Kurdish forces and coalition air strikes. A bombing two weeks ago in the regional capital Arbil has heightened those concerns.

"There have been cases of ISIL affiliates and sympathisers disguised as IDPs in Kurdistan, and arrests have been made."

Displaced Sunni Arabs have borne the brunt of the restrictions. In the past, Arabs wishing to enter the region had to find a Kurd to vouch for them, but now even that is not enough to gain access for some.

At a checkpoint on the edge of Arbil, a group of people denied entry wait for their luck to change. All of them are Sunni Arabs. One man said he had spent two weeks sleeping rough by the side of the road, strewn with cans and wrappers thrown from the windows of passing cars.

"They won't let us in," said Abdullah Salout, whose house in Shirqat was blown up by Islamic State because he was a policeman. "Only God can get us through this checkpoint".

INFLUX FROM SYRIA AND IRAQ

At a camp in the disused hangar of a construction company on Arbil's outskirts, the displaced complain they have not been able to wash in days and lice have spread.

"We need soap, we need fuel, we need money," says one woman. "We need boats too," jokes one man, looking out over part of the camp flooded by heavy rain.

Even before three major waves of displacement within Iraq this year, the Kurdistan Regional Government (KRG) said it was stretched to accommodate a quarter of a million refugees from Syria.

A further 76,000 people arrived early this year after militants seized a city in the Sunni Arab heartland of Anbar.

The fall of Mosul in June sent 131,400 people fleeing into the region and two months later ISIL surged north, precipitating the largest influx of 492,000 people.

Many more have headed for the Kurdish region from fighting elsewhere in Iraq, and the region has also taken in 20,000 refugees from the Syrian border town of Kobani.

Those with friends and family in the Kurdish region are staying with them. Others are living in rented apartments, or sharing motel rooms. Up to 70,000 are in camps, but the rest are sheltering in half-built office blocks, supermarkets and shopping centres.

Many Kurds sympathise with the displaced, but some building site owners want to resume work and are threatening to evict them.

Resentment is also growing in the Kurdish governorate of Dohuk -- the most heavily affected in all Iraq, where the number of displaced people equals roughly half its own population.

Two months after the start of the academic year, some children have not gone back to school because classrooms are occupied by displaced people.

The United Nations has also been criticised for its response, which Kurdish officials and smaller aid agencies say has been hampered by bureaucracy and red tape.

The United Nations has raised 29 percent of the $2.23 billion it needs to support displaced people across Iraq until the end of 2015. Unless more donations emerge, assistance will have to be cut.

The priority is to move those without a roof over their heads into shelter. Beyond that, the future of displaced Iraqis in Kurdistan is uncertain. Kurdish authorities want as many as possible to be housed in camps, but the United Nations says that is not viable.

"There is no strategy for the long term," said Dindar Zebari, deputy head of Kurdistan's Department of Foreign Relations. "The KRG wishes for these people to go back to their own homes: this is the solution."