A member of the Palestinian national soccer team who was held in Israel jail without trial for three years is free after he staged an four-month hunger strike in protest. 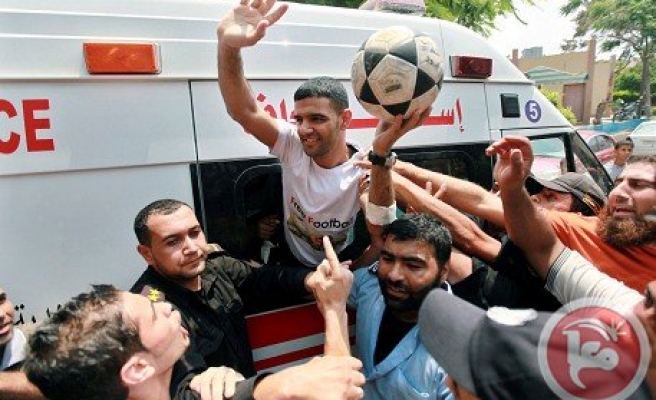 Israel released a member of the Palestinian national soccer team on Tuesday after holding him in jail without trial for three years, during which he staged an four-month hunger strike in protest, Palestinian officials said.

Mahmoud al-Sarsak, 25, received a hero's welcome on his return home to besieged Gaza.

"I thank God and all the athletes of the world," Sarsak said, between sips from a bottle of water.

Israel had detained Sarsak in 2009 when he left Gaza to play soccer in the occupied West Bank.

Sarsak was never charged but was jailed as an unlawful combatant. Israel withdrew its troops and settlers from the besieged Gaza Strip in 2005.

Sarsak was the latest of several Palestinian prisoners freed by Israel in the past three months after intermittent hunger strikes protesting against their detention without trial and demanding better prison conditions.

An Israeli official confirmed Sarsak was being released on Tuesday but had no other details.

Israel struck a deal last month with representatives of 1,600 Palestinian prisoners under which they stopped hunger strikes of up to 27 days in exchange for Israel ending their solitary confinement, permitting family visits and making other improvements in prison conditions.

Another Gaza man, Akram al-Rekhawi, a member of the Hamas group who has served eight years of a nine-year sentence in Israel, has been on an intermittent hunger strike for 90 days seeking an early release due to illness, Palestinian officials said.