The situation has led to a face-off between Arab refugees and Iraqi Kurdish peshmerga forces who have occupied the traditionally Turkmen city of Kirkuk as a precaution against ISIL militants. 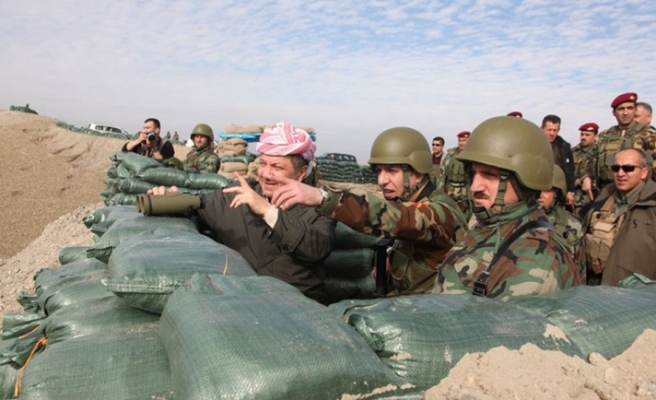 Life has been filled with hardship for tens of thousands of interally displaced Iraqi Arabs who have fled their homes from the ISIL onslaught to Kurdish-dominated regions of northern Iraq.

Iraqi Kurds, who are also at war with advancing ISIL militants, view Iraqi Arabs who have entered their territories with suspicion, fearing that they may have links with the rebels.

The situation has led to a face-off between Arab refugees and Iraqi Kurdish peshmerga forces who have occupied the traditionally Turkmen city of Kirkuk as a precaution against ISIL militants.

Abu Sara, who with his family fled the town of Taza to Kirkuk after the ISIL took control of Mosul in June, told Belllingham Herald "They assume we are all ISIL and so they treat us like terrorists."

Abdullah Khalel Ibrahim, a lifelong Arab resident of Kirkuk, said that discrimination against Arabs in the city is on the rise.

"Kidnappings, killings, difficulties finding jobs, difficulties moving around freely - all of that has doubled now. I lived in Kirkuk all my life and I feel unwelcome here," he said.

Meanwhile, Oum Hakem, who fled to Kirkuk from Tikrit, said peshmerga soldiers denied her three college-age sonsentrance into the city when they were fleeing.

According to the Bellingham Herald, the autonomous Kurdish Regional Government of northern Iraq hopes to incorporate Kirkuk into an independent state and is therefore concerned that the 60,000 Arab and Turkmen refugees in the city could undermine the city's Kurdish majority.

according to Rakkan Ismail Ali, the province's deputy governor, and more than a million have fled to northern Iraq this year. The influx is prompting major security concerns.

"The city is not ready," Kirkuk's deputy governor Rakkan Ismail Ali said about the influx of refugees.

"We don't know how the security forces are dealing with the situation. With the current mess, (we can't tell) if those who are coming to Kirkuk are ISIL or not," said the deputy governor, who is himself an Arab.

Peshmerga Lt. Gen. Asso Ali added that his forces have surrounded Kirkuk to defend it from possible ISIL advances, and are having to out civilians from militants every day. "It's our responsibility to keep the city safe," he said.

Iraqi Kurdish forces captured a strategic border crossing and several villages from ISIL fighters in northern Iraq on Tuesday, scoring gains as the militants were pounded by heavy U.S.-led air strikes and the Iraqi army advanced from the south.

An Iraqi Kurdish political source said Kurdish peshmerga fighters took control of the Rabia border crossing with Syria in a battle that began before dawn.

"It's the most important strategic point for crossing. Once that's taken it's going to cut the supply route and make the operation to reach Sinjar easier," the source said, referring to a mountain further south where members of the Yazidi minority sect have been trapped by ISIL fighters.

Twelve ISIL fighters' bodies lay on the border at the crossing after the battle, said Hemin Hawrami head of the Kurdish Democratic Party's foreign relations department, on Twitter.

The ability to cross the frontier freely has been a major tactical advantage for ISIL fighters on both sides. Fighters swept from Syria into northern Iraq in June and returned with heavy weapons seized from fleeing Iraqi government troops, which they have used to expand their territory in Syria.

U.S.-led forces have been bombing ISIL targets in Iraq since August and expanded the campaign to Syria last week in an effort to defeat the fighters who have swept through Sunni areas of both countries.

In two complex, multi-sided civil wars, the Sunni fighters are battling against Shi'ite-backed government in both countries, rival Sunni groups in Syria and separate Kurdish forces on either side of the frontier.

In Iraq, a coalition of Iraqi army, Shi'ite militia fighters and Kurdish troops known as peshmerga have been slowly recapturing Sunni villages that had been under ISIL control south of the Kurdish-held oil city of Kirkuk.

ISIL fighters had used positions in the villages to fire mortars at neighbouring Daquq, a town populated mainly by ethnic Turkmen Shi'ite Muslims. When Kurdish fighters entered the villages they were empty, the security official said.

GROUND SHAKING BENEATH OUR FEET

Forces were also pushing north from the city of Tuz Khurmatu to drive ISIL fighters out of the countryside that surrounds Kirkuk, the official said. He credited U.S.-led air strikes with helping the peshmerga clear the two villages.

"This area witnessed intense air strikes from U.S.-led strikes and Iraqi air strikes overnight and at dawn," the official said.

The explosions shook Kirkuk itself: "We felt the ground shaking beneath our feet, and then we heard that there were air strikes outside Kirkuk," said a policeman in the city contacted by Reuters who asked not to be identified.

Peshmerga secretary-general Jabbar Yawar estimated the Iraqi Kurds had now retaken around half the territory they lost when the militants surged north towards the regional capital Arbil in early August, an advance that helped to prompt the U.S. strikes.

"We have absorbed the shock and are pushing them back," Yawar said.

In addition to aiding the Kurds in the north, U.S. air strikes have targeted fighters west of Baghdad and on its southern outskirts, where militants have infiltrated difficult rural terrain known during the U.S. occupation as the "triangle of death".

"It appears that 67 (ISIL) militants were killed in Fadiliya," said an Iraqi security source, referring to a town in the Euphrates valley south of the capital. He said the casualty estimate came from satellite imagery and informants.

Unlike in Iraq, where the U.S.-led air strikes are coordinated closely with the government and Kurdish forces, Washington has no powerful allies on the ground in Syria, making its strategy there riskier and more precarious.

The United States and its Western and Arab allies oppose the government of President Bashar al-Assad and are wary of helping him by hurting his enemies. Turkey, the neighbour with the biggest military, has so far held back from joining the U.S.-led coalition, despite an advance in the past 10 days by ISIL fighters against Kurds near the frontier that has caused the fastest refugee exodus of the three-year civil war.

The fighters have laid siege to Kobani, a Kurdish city on Syria's border with Turkey. The rattle of sporadic gunfire could be heard from across the frontier, and a shell could be seen exploding in olive groves on the western outskirts of town.

A steady stream of people, mostly men, were crossing the border post back into Syria, apparently to help defend the town.

Ocalan Iso, deputy commander of the Kurdish forces defending the town, told Reuters Kurdish troops had battled ISIL fighters armed with tanks through the night and into Tuesday.

The Syrian Observatory for Human Rights, a body that monitors the war with a network on the ground, said U.S.-led strikes had hit ISIL positions west of Kobani. Kurdish commanders have complained in recent days that the air strikes hitting elsewhere were not helping them at the front.