At least 23 people died in the Kirkuk and Erbil areas 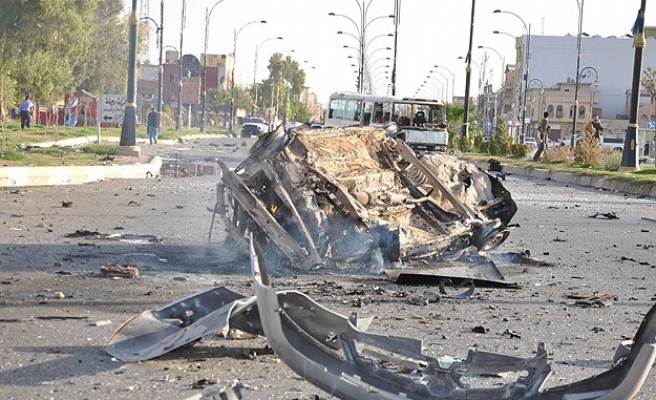 At least 23 people have been killed in four suicide attacks in Kirkuk and Erbil in northern Iraq.

Another 70 were injured in Saturday’s attacks in Kurdish-controlled areas.

Security forces said an explosives-laden truck was driven into a four-storey building used to house Kurdish peshmerga fighters on the highway between Kirkuk and Baghdad.

In two other attacks, the branch offices of security forces in the Kurdish neighborhood of Rahim Ava, north of Kirkuk, were targeted.

Following these attacks, a car-bomb detonated in front of Selahaddin University’s technical institute on the road between Kirkuk and Erbil.

Another bomber has killed at least 11 people in an attack on a military intelligence building in Baghdad.

The bomber drove a vehicle packed with explosives into the gates of the offices in the Karada district of the Iraqi capital on Saturday afternoon, injuring at least 25 others, an Anadolu Agency journalist reported.

The attack came a day after a Shiite attack on a Sunni mosque killed at least 73 worshippers in Diyala province, intensifying sectarian violence in Iraq as the new prime minister attempts to form a unity government to undermine the Islamic State’s support among Sunni tribes and former Baathists.

In other parts of the country, officials reported at least 17 IS fighters were killed.

In Haditha district, Sabah Karhut, chairman of Anbar provincial council, said 10 IS gunmen were killed in a battle against the army and tribesmen.

Major General Jamil al-Shammari, chief of police in Diyala, reported that IS commander Musab Al-Senjeri and his second-in-command Khalid al-Dulaimi were killed by security forces in Baqubah.

The mayor of As Sadiyah, Ahmed Al Zarghooshi, said a total of seven IS militants were killed in Baqubah. Clashes are ongoing between peshmerga forces and IS militants in Jalula.

The bombings come as air strikes against IS take a toll on the insurgents and Iraqi federal and Kurdish forces gradually reverse the militants' gains made since June.

According to an Anadolu Agency correspondent, the peshmerga have been supported by army helicopters as they try to take Jalula from the insurgents. The Kurdish forces include fighters from the Kurdish Worker's Party, known as the PKK.

IS militants blew up a bridge between Khanaqin and Jalula to protect their retreat.

The advance of IS in northern and western Iraq has largely been stemmed thanks to the air superiority of government and Kurdish forces. However, a return to widespread sectarian violence is likely to drive Sunni Muslims to join the IS insurgency.

Bombings, kidnappings and murders are now a near-daily occurrence around Iraq, as they were in 2006 and 2007 when Shiite-Sunni violence was at its height.