Sunnis and Shiites break fast together in Iraq

Ramadan has been robbed of its rhythm of communal solidarity for Bashir Khalil, a 39-year-old Shiite, and his wife Nidal, a Sunni. 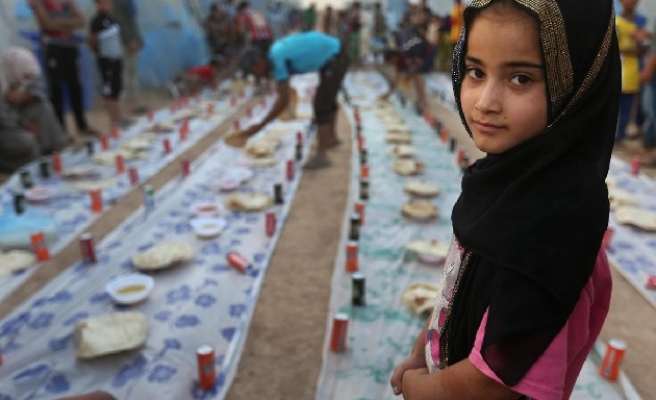 Iraqi refugees ending their first daylong fast of the holy Muslim month of Ramadan waving pots and pans were pushed back by the police in an encapment for the displaced.

In this dusty, hot encampment some 60 miles (100 kilometers) from the northern city of Irbil, the capital of Iraq's self-ruled Kurdish region, dozens of shouting men scrambled on Sunday to reach pots of rice, meat and chicken stew.

The chaotic scene underscored the fearful insecurity of displaced Iraqis as they begin Ramadan in a nation gripped by unrest and bitterly divided along sectarian lines.

Ramadan has been robbed of its rhythm of communal solidarity for Bashir Khalil, a 39-year-old Shiite, and his wife Nidal, a Sunni.

The couple fled Iraq's second-largest city of Mosul after it was captured by Islamic State of Iraq and the Levant (ISIL) fighters earlier this month. But in their impoverished quarter of the city, neighbors shared their food. Here, when the food ended, there would be no more until another charity came by.

"When this food finishes, there'll be nothing else," 34-year-old Nidal Khalil lamented.

They fled after the ISIL interrogated them. After they recieved reassurance from local gunmen that they wouldn't be harmed they returned to their home that had been damaged in clashes.

"We don't want this one or that one," said Nidal Khalil, referring to the Shiite-dominated government and the Sunni rebels. "Neither of them cares about us poor people."