Sunnis and Kurds refused to return from recess at the parliamentary chamber in the fortified "green zone" where they were meeting for the first time since an election in April. 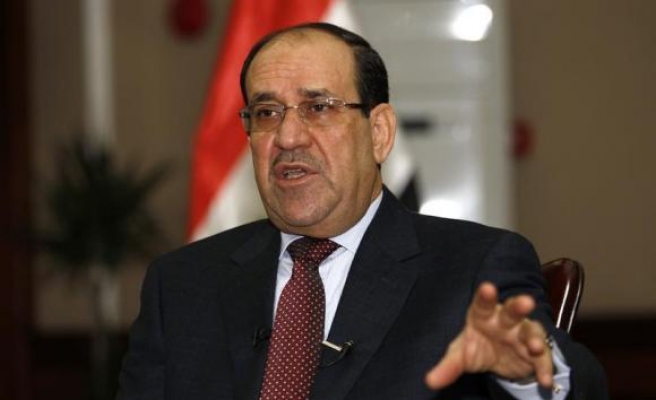 Sunnis and Kurds abandoned the first meeting of Iraq's new parliament on Tuesday after Shi'ites failed to name a prime minister to replace Nuri al-Maliki, wrecking hopes that a unity government would be swiftly built to save Iraq from collapse.

The United States, United Nations, Iran and Iraq's own Shi'ite clergy have pushed hard for politicians to come up with an inclusive government to save the country as insurgents bear down on Baghdad.

But with Shi'ites failing to name a prime minister, Sunnis and Kurds refused to return from recess at the parliamentary chamber in the fortified "green zone" where they were meeting for the first time since an election in April.

Parliament is not likely to meet again for at least a week, leaving the country in a state of political limbo and Maliki clinging to power as a caretaker, rejected by Sunnis and Kurds.

Under Iraq's governing system put in place after the fall of Saddam Hussein, the prime minister has always been a member of the Shi'ite majority, the speaker of parliament a Sunni and the largely ceremonial president a Kurd.

The Shi'ite bloc known as the National Alliance, in which Maliki's State of Law coalition is the biggest group, has met repeatedly in recent days to bargain over the premiership but has so far failed either to endorse Maliki for a third term or to name an alternative.

Fewer than a third of lawmakers returned from the recess. Sunni parties said they would not put forward their candidate for speaker until the Shi'ites pick a premier. The Kurds have also yet to nominate a president.

"If there is a new policy with a new prime minister, we will deal with them positively, otherwise the country will go from bad to worse," said Osama al-Nujaifi, a leading Sunni politician, former speaker and strong foe of Maliki.

"We don't have a candidate (for speaker) so far. It will come after we hear the name of the candidate of the National Alliance for prime minister."

Mehdi al-Hafidh, parliament's oldest member who is tasked by the constitution with chairing the legislature's meetings until a speaker is named, said the next session would be held in a week, if agreement were possible after discussions.

Baghdad can ill-afford further delays. Iraqi troops have been battling for three weeks against fighters led by the group formerly known as the Islamic State in Iraq and the Levant (ISIL). This week it shortened its name to the Islamic State and declared its leader "caliph" - historic title of successors of the Prophet Mohammad whole ruled the whole Muslim world.

Fighting has raged in recent days in former dictator Saddam Hussein's home city, Tikrit, north of Baghdad. ISIL also controls suburbs just west of the capital and fighting has broken out to the south, leaving the city of 7 million confronting threats from three sides.

The United Nations said on Tuesday more than 2,400 Iraqis had been killed in June alone, making the month by far the deadliest since the height of sectarian warfare during the U.S. "surge" offensive in 2007.

In a reminder of that conflict, mortars fell near a Shi'ite holy shrine in Samarra which was bombed in 2006, unleashing the sectarian bloodshed that killed tens of thousands over the next two years. Samarra, north of Baghdad, is now held by Baghdad's troops with ISIL in the surrounding countryside.

Parliament opened its first session with an orchestral rendition of the national anthem and a recitation of a Quranic verse emphasising unity. Hafidh called on lawmakers to confront the crisis.

"The security setback that has beset Iraq must be brought to a stop, and security and stability have to be regained all over Iraq, so that it can head down the path in the right way toward the future," he said.

Lawmakers stood at the arrival of Maliki, who waved to his long-time foe Nujaifi and shook hands with Saleh al-Mutlaq, another leading Sunni politician.

But the anger between Iraq's three main ethnic and sectarian groups flared up quickly when a Kurdish lawmaker accused the government of withholding salaries for the Kurds' autonomous region. Kadhim al-Sayadi, a lawmaker in Maliki's list, shouted back that Kurds were taking down Iraqi flags.

"The Iraqi flag is an honour above your head. Why do you take it down?" he shouted. "The day will come when we will crush your heads."

The dramatic advance by ISIL, which has dominated swathes of territory in an arc from Aleppo in Syria to near the western edge of Baghdad in Iraq, has stunned Iraq and the West. This month the group and allied militants swiftly seized border posts, oilfields and northern Iraq's main northern city Mosul.

Other Iraqi Sunni armed groups who resent what they see as persecution under Maliki are backing the insurgency.

Kurds, meanwhile, have taken advantage of the advance to seize territory, including the city of Kirkuk, which they see as their historic capital and which sits above huge oil deposits.

Results of April's elections initially suggested parliament would easily confirm Maliki in power for a third term. But with lawmakers taking their seats now after the collapse of the army in the north, politicians face a more fundamental task of staving off the collapse of the state.

Maliki's foes blame him for the rapid advance of the Sunni insurgents. Although Maliki's State of Law coalition won the most seats, it still needs allies to govern. Sunnis and Kurds demand he go, arguing he favoured his own sect, inflaming the resentment that fuels the insurgency.

The United States has not publicly called for Maliki to leave power but has demanded a more inclusive government in Baghdad as the price for more aggressive help.

Washington has so far pledged 300 mainly special forces advisers and said on Monday it was sending a further 300 troops to help secure the embassy and Baghdad airport.

Maliki's government, with the help of Shi'ite sectarian militias, has managed to stop the militants short of the capital but has been unable to take back cities its forces abandoned.

The army attempted last week to take back Tikrit but could not recapture the city, 160 km (100 miles) north of Baghdad, where ISIL fighters had machine-gunned scores of soldiers in shallow graves after capturing it on June 12. Residents said fighting raged on the city's southern outskirts on Monday.

On Friday, in an unusual political intervention, Grand Ayatollah Ali al-Sistani, Iraq's most senior Shi'ite cleric, called on political blocs to name the prime minister, president and speaker before parliament met on Tuesday.

Now that the deadline has passed, a prominent Shi'ite lawmaker told Reuters he expected Sistani to keep up the pressure in the days ahead.

Maliki's close friends say he does not want to relinquish power, although senior members of his State of Law coalition have told Reuters an alternative premier from within his party was being discussed. Rival Shi'ite groups also have candidates.

Many worry that a drawn-out process will waste precious time in confronting the militants, who have vowed to advance on Baghdad. A Shi'ite lawmaker, speaking on condition of anonymity, said: "Things are bad. The political process is not commensurate with the speed of military developments."