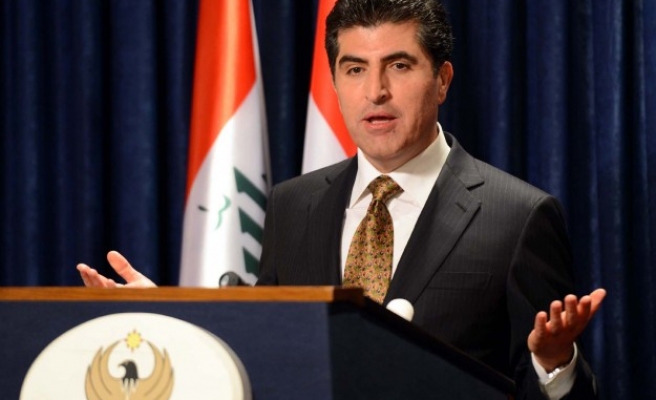 The relationship between the Iraq’s central government and semi-autonomous Kurds needs to be redefined to reflect Baghdad’s loss of influence across large swathes of the country, the Kurdish prime minister has said.

Nechirvan Barzani called for a “new mechanism to navigate the course of future Erbil-Baghdad relations” during a meeting with Angus Mackay, the British consul to Erbil, on Saturday.

He added: “A new period has begun since ISIL captured Mosul [on June 10] and everybody must acknowledge that this has changed the whole status quo.”

The collapse of the central government’s authority in some parts of northern and western Iraq has emboldened the Kurdish Regional Government’s ambitions for an independent Kurdish state.

Barzani, the nephew of the regional government’s President Massoud Barzani, touched on the thousands of people displaced by ongoing violence in Iraq and called for more support from the international community and relief organizations.

"These people are faced with serious problems and the Kurdistan region alone cannot accommodate all the needs of the refugees and the displaced people, especially because their numbers are growing daily," Barzani said in a separate meeting with Italian consul Carmelo Ficarra, reported on the regional government’s website.

He accused Baghdad of shirking responsibility for the refugees and the internally displaced and claimed the Kurdish authority has been left to shoulder the burden.

More than a million people have fled their homes since the onset of the ISIL-led insurgency in Iraq with large numbers flooding into the Kurdish region, considered one of the few safe refuges.

Iraq's parliament failed on Sunday to break a damaging political deadlock which is holding up the formation of new government to tackle an insurgency raging less than 50 miles (80 km) from Baghdad.

After a brief session, parliamentary officials delayed until Tuesday their efforts to reach agreement between the country's Shi'ite, Sunni and Kurdish politicians on the posts of prime minister, president and parliamentary speaker.

Prime Minister Nuri al-Maliki, whose State of Law coalition is the largest individual list in parliament, is seeking a third term but faces opposition from Sunnis and Kurds who say he has ruled for the Shi'ite majority at the expense of minority communities. Even rival Shi'ite parties wish to unseat Maliki.

The disagreement over Maliki's future appeared to be blocking progress on the other political posts.

"We have presented our candidate for speaker and done what we should do," said outgoing speaker Osama Nujaifi. "We hold the other blocs responsible for the delay."

"Once we manage to complete the democratic process to form the government this would help to stop the great destruction happening in Iraq which is jeopardising the country's unity."

With politics in Baghdad paralysed, and Maliki continuing in a caretaker role, the fighting has raged on.

They said militants in 50 to 60 vehicles stormed the town of Dhuluiya, about 70 km (45 miles) north of Baghdad at 3.30 am (0030 GMT), taking the mayor's office and municipal council building and fighting to take control of the police station.

The Sunni militants were pushed back at Dhuluiya on June 14 by soldiers backed by fighters from the Shi'ite Asaib Ahl al-Haq militia, but fighting has continued and they have taken other towns.

The police and witnesses said local police and tribes were battling the militants in Dhuluiya on Sunday. They said four policemen were killed in the fighting, as well as two militants and two civilians.

Insurgents also bombed a bridge linking Dhuluiya to the nearby Shi'ite town of Balad to the west, they said.

On Saturday, government forces launched an assault to repel Islamic State militants who had fought their way into a military base on the edge of Muqdadiya, 80 km (50 miles) northeast of the capital.

Sources at the morgue and hospital in the nearby town of Baquba said they had received the bodies of 15 Shi'ite militia fighters transferred after the morning's fighting.

State TV also reported 24 "terrorists" had been killed. Seven civilians including children from nearby villages were killed by helicopter gunship fire, police and medics said.

The Sunni militants had moved towards the base after seizing the town of Sadur just to the north, another security source and witnesses said. They were equipped with artillery and mortars and drove vehicles including captured tanks and Humvees.