US constructs firebase in north Iraq 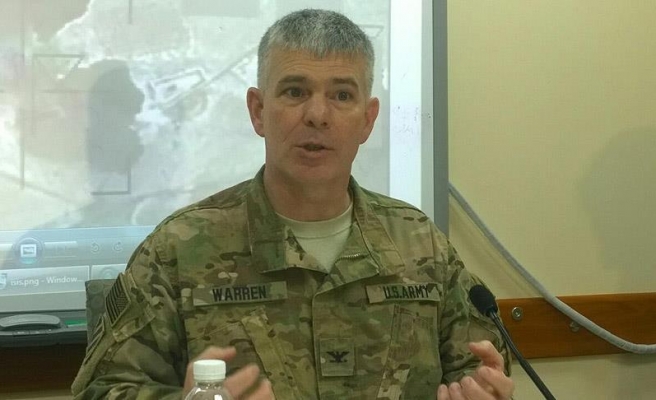 The target of ISIL rocket fire that killed a Marine was a newly constructed U.S.-operated firebase near Makhmur camp where American advisers train Iraqi forces ahead of a Mosul operation, a defense official said Monday.

“To provide protection for those advisers in Makhmur, we realize that we need some fire support, we need some artillery to provide great protection," said Col. Steve Warren, U.S.-led anti-ISIL coalition spokesman.

He told reporters during a teleconference from Baghdad that it was the first U.S. forces controlled artillery base in Iraq since the anti-ISIL war began.

"So we moved these Marines into position in a location right adjacent to where the troops are in Makhmur where the Iraqi troops are. We kind of generated a fire base,” the spokesman added.

According to Warren, it was Katyusha rockets that ISIL fired and the U.S.-controlled firebase near Makmur, 70 miles southeast of Mosul located between Erbil and Nineveh provinces was “targeted specifically”.

Staff Sgt. Louis F. Cardin from California, was killed by ISIL rockets that hit the firebase.

Warren noted that less than 200 Marines were positioned at the base last week and will be there as long as U.S. advisers are in Makmur.

Their mission will be limited to force protection and are not allowed to take action without any security threat to American or Iraqi forces at the Makhmur training camp, he added.

Several thousand Iraqi troops moved to Makhmur a few weeks ago as a part of preparation for Mosul operation.

American advisers help Iraqi forces for staging, preparing and planning for the battle as well synchronizing air and ground operations during the Mosul operation, according to the Pentagon.

Warren told reporters that earlier in the day a “squad-sized” element of ISIL fighters, likely under 10, crept in to attack the U.S. base using small-arms fire.

Two of ISIL militants were killed and the others ran off, the spokesman added.

President Barack Obama pledged “no boots on the ground” against ISIL, but it’s been unclear where the advising or combat missions begin and end.

According to Warren, last week the U.S.-led coalition destroyed nine weapons facilities in western Iraq in the city of Hit where “chemical infrastructure” was probably destroyed.