U.S. destroys millions of dollars in arms in Iraq

Military officials estimated that perhaps $3 million worth of American-supplied equipment was destroyed in over 90 air strikes in the last three weeks. 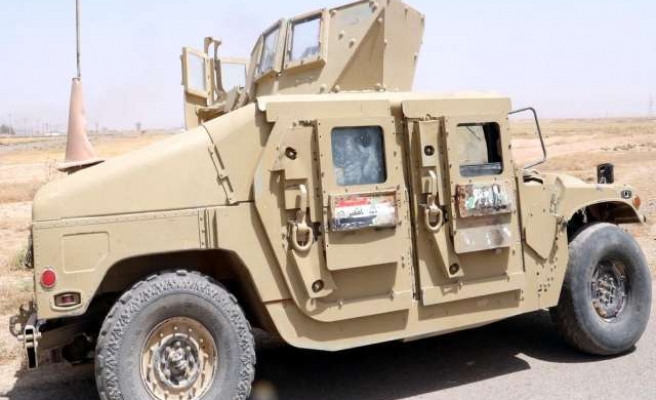 The grainy black-and-white footage shows a military vehicle, a small dark mass in the crosshairs of a U.S. war plane, seconds before it explodes in a flash of light.

That Aug. 16 strike in northern Iraq, shown in video released by the U.S. military, destroyed an unknown number of ISIL fighters and one U.S.-made armored vehicle with a price tag of up to $300,000.

Since the Obama administration began strikes there on Aug. 8, U.S. fighter jets and drones have destroyed an estimated $3 million-$4 million worth of Iraqi military vehicles that were provided by the United States and later seized by militants who now control a third of Iraq.

The growing tally of U.S.-made, U.S.-destroyed weaponry is testament to how far Iraq has veered off the course the Obama administration expected when U.S. troops withdrew in 2011.

U.S. officials had hoped their effort to train and arm the Iraq military, at a cost more of than $20 billion, would guarantee stability.

"When you see your own equipment blown up by U.S. airplanes, there's this inherent feeling of defeat, even if it doesn't have an American flag on it anymore," said Matthew Pelak, a former U.S. infantry sergeant deployed to Iraq in 2004, and now a firefighter in New York. "It's incredibly discouraging."

When Iraqi soldiers abandoned bases in large numbers ahead of ISIL's advance across northern Iraq in June, they left behind guns and sophisticated fighting gear.

The administration is considering expanding its campaign against ISIL fighters. That could mean the first U.S. military action within Syria, where a bloody civil conflict fueled the rise of the hardline group.

Military officials estimated that perhaps $3 million worth of American-supplied equipment was destroyed in over 90 air strikes in the last three weeks.

That included at least 20 U.S.-made Humvees, and one mine-resistant, ambush-protected vehicle, or MRAP.

The low-slung Humvee, made famous early in the Iraq war when it failed to protect soldiers from roadside bombs, costs $200,000 to $300,000 new, if armored for military use.

The hulking MRAP, designed to counter roadside bombs in Iraq and Afghanistan, can cost half a million to $1 million, according to military sales records.

U.S. strikes have also destroyed scores of trucks and other armored vehicles officials have not identified, but some of which may have been produced in the United States.

Some of the U.S. equipment in Iraq was given as part of the effort to rebuild Iraqi forces dissolved after the U.S. invasion in 2003; some was bought by the oil-rich state and some was left by U.S. forces when they withdrew.