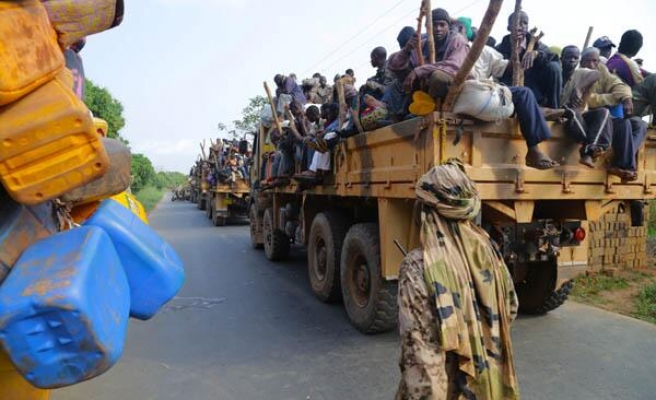 "Today we're mocking Muslims by wearing their clothes and drinking beer," one of them told an Anadolu Agency reporter on the scene.

The Islamic faith expressly forbids the drinking of alcohol.

Some members of the group pretended to perform Muslim prayer rites, while others danced to the cheers of onlookers.

The angry Christians, numbering roughly 300, pelted the peacekeepers escorting the convoy with stones.

Others tried to steal luggage from the truck.

CAR descended into anarchy in March 2013 when Seleka rebels – said to be mostly Muslim – ousted Francois Bozize, a Christian, who had come to power in a 2003 coup, and installed Djotodia as interim president.

In the months since, the country has been plagued by tit-for-tat sectarian violence between the Christian anti-balaka militia and former seleka fighters.

Djotodia, the country's first Muslim president since its 1960 independence from France, stepped down in January under international pressure.

Muslims have increasingly been targeted since Bangui mayor Catherine Samba-Panza, a Christian, was elected president the same month.

In a recent report, Amnesty International said that more than 50 Muslims had been killed by Christian anti-balaka militias in two separate attacks northwest of Bangui.

International humanitarian group Save the Children earlier confirmed the murder of at least 23 Muslims, including three children, in an attack on a refugee convoy.

Chears, Muslims and their cult unacceptable. I will do the same thing who trys to brainwash me by taqiya