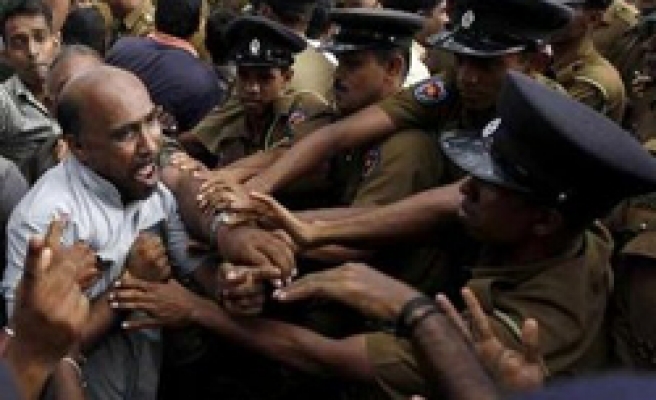 A Buddhist mob attacked a mosque in Sri Lanka's capital and at least 12 people were injured, the latest in a series of attacks on the minority Muslim community by members of the Buddhist majority.

A mob of Buddhists, who are mainly ethnic Sinhalese in Sri Lanka, threw stones at a three-storey mosque and nearby houses in a central Colombo neighbourhood during evening prayers on Saturday, residents told Reuters.

Later, hundreds of Muslim residents took to the streets, some clutching sticks, to prevent any further attacks on their community, witnesses said. Police reinforcements were sent and authorities imposed a curfew until Sunday morning.

A senior member of staff at one of the city's main hospitals said 12 injured people, including two police officers, had been brought in. Three people were still in hospital on Sunday.

There has been increasing violence against Muslims in Sri Lanka since last year, mirroring events in Buddhist-majority Myanmar, which has also seen a surge of attacks by members of the majority community against Muslims.

In Myanmar, hardline Buddhist monks have been at the forefront of campaigns against Muslims.

In Sri Lanka, a group known as Bodu Bala Sena (BBS), or the "Buddhist power force", has been trying to win over Buddhists to their campaign against Muslims.

A spokesman for the BBS, Dilantha Vithanage, denied any involvement by his organisation in the latest mosque attack.

The mosque damaged in the Saturday night attack was only built a month ago after hardline Buddhists forced a nearby mosque to close.

The U.S. Embassy in Colombo said the incident was particularly troubling in light of a number of recent attacks against the Muslim community in Sri Lanka.

"Targeting any place of worship should never be permitted and we urge calm from all sides. We call for prosecution of perpetrators in this attack and an end to religious-based violence," the embassy said in a statement.

In a separate incident, a hand grenade was thrown at a Buddhist temple in the Jaffna peninsula, on the northern tip of the island. There were no injuries, police said.

Jaffna is largely made of ethnic minority Tamil people, most of whom are Hindu and Christian. The area was fiercely contested in a 26-year war between government forces and Tamil separatists that ended in 2009.

The message of Islam for peace,love and health and stop war from www.godworkerinternational.com TO,Worldwide Governments and Peoples With USA and USA war teams except President in a World Full Time Islam and peace,message