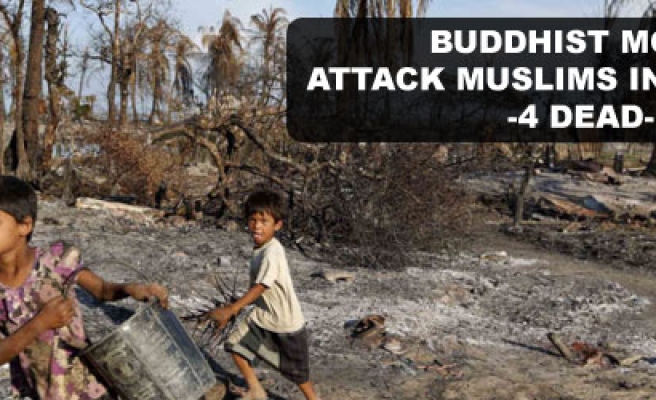 Buddhist mobs attacked Muslim neighbourhoods in Myanmar’s restive Rakhine State on Tuesday, killing at least four people just hours before a planned visit to the area by the President.

“Four people were reported dead and 50 more were injured by this evening,” said a police officer in Thandwe, reported the Hindu.

The mobs also burned down at least 100 houses and shops in villages neighbouring Thandwe city, he said.

Buddhist mobs started setting fire to Muslim houses and shops in five villages around Thandwe on Tuesday, and police failed to contain it due to a lack of personnel, the police officer said.

Thandwe is situated more than 100 km south of Sittwe, the capital of the Rakhine State, which was the scene of bloody sectarian fighting last year that claimed at least 167 lives and left 140,000 homeless, most of them Arakan Muslims.

Last year’s violence was aimed at the Rohingya Muslim minority group, a stateless people who have been living for generations in the three northernmost townships of Rakhine, which borders Bangladesh.

Tuesday’s violence appeared to be directed against Muslims who are Myanmar citizens, sources said.

President Thein Sein will arrive in Sittwe this evening and plans to meet ethnic Rakhine members of parliament tomorrow.