Hundreds of burnt-out homes and trucks can be seen along the road to Bouar. Copies of the Quran, the Muslim holy book, along with Muslim identity documents, lie on the ground... 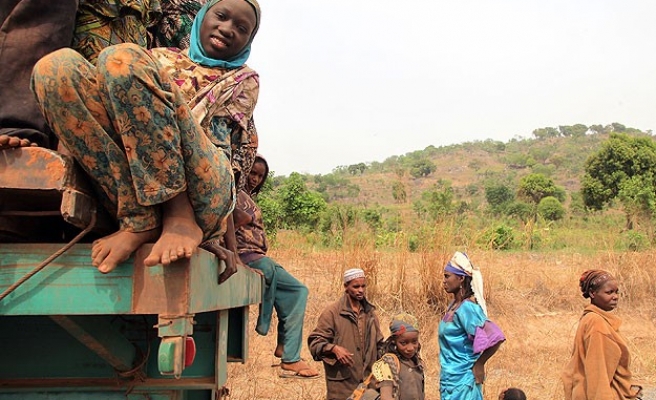 "I don't want to see them [anti-balaka]," Alidou, who joined a convoy of trucks carrying Muslims fleeing the violence, told Anadolu Agency.

"Every time they come, I run and hide in the forest; they've killed many people," added Alidou, whose mother and father, the latter an ex-Seleka fighter, have already fled to neighboring Cameroon.

Aboard one of the trucks is Alidou's childhood friend, Juisse, a Christian, who joined the convoy in fear of his father, an anti-balaka militiaman and former member of the CAR army (FACA).

Juisse hopes to go to Cameroon and live with his grandmother there.

The convoy, led by African peacekeepers, set out early Saturday from Bangui, CAR's restive capital, en route to Garoua-Boulai on the border with Cameroon.

Hundreds of burnt-out homes and trucks can be seen along the road to Bouar, a border town. Copies of the Quran, the Muslim holy book, along with Muslim identity documents, lie on the ground.

Each time the convoy stops, the refugees search for discarded Qurans and the identify papers of missing friends or relatives. Many try – in vain – to call loved ones still stranded in distant villages.

Violence against Muslims has intensified since Catherine Samba-Panza, a Christian, was elected interim president in January.

A number of Muslims have recently been lynched in broad daylight and their bodies set on fire. Several mosques in Bangui, too, have been destroyed and scores of Muslim homes looted.