England cricketer Moeen Ali said "One of the biggest things I’d like to achieve is to encourage other people of faith, any sort of faith, to play cricket, or professional sport, and follow your faith." 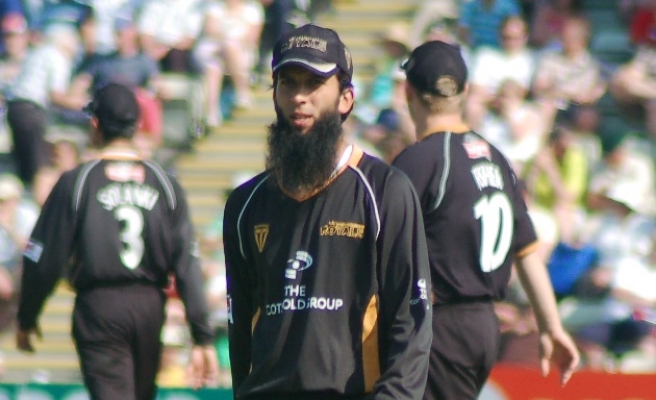 England's famous bearded Muslim cricketer Moeen Ali, who has made both headlines in the British media for both his superb performances on the field and his unique appearance, has said that he wishes to be a role-model for people of faith to participate more in the sport.

Speaking in an interview with Mehdi Hassan for the Huffington Post, Moeen Ali - who has been dubbed 'The Beard That's Feared' - explained his journey through his Cricketing career and his struggle to overcome prejudice in order to be accepted into the hearts of English sports fans.

Detailing his introduction to religion as a teenager who was not practising his faith and at the time never thought he'd become an England cricketer let alone a religious, bearded England crickets, Ali said that he started looking into Islam after a discussion he had with a Christian convert to the religion.

"I asked him why he had become a Muslim.. I said to him: ‘Why would you follow a religion which has [forced] marriages and all these wrong things?' And he said, ‘That’s not your religion, that’s from your culture, your Pakistani culture’ and from there we just started talking," Ali explained.

Today, however, Ali said his religion means "everything" to him, adding "My relationship with the creator, following the prophet.. This is where we Muslims have gone wrong. We stopped following the Quran and the 'sunnah' [the life example of the prophet] and have been deluded by the world...People get involved not just in politics but in groups and sects and.. forget the main reason why we’re here: to worship Allah."

Regarding the reaction he gets as a bearded, Muslim cricketer, Ali said, "I get asked a lot of questions about my beard, about my religion, and I feel I have to answer them. Be honest with [people]."

However, admitting that he has faced criticism for his very obvious representation of his religion in the British media, Ali brushed off negative comments saying "At the end of the day, I'm a Muslim and it doesn’t bother me what someone like him [says]. It doesn't bother me one bit.”

"To be honest, throughout my cricket career, since I've had a beard, I've had to explain a lot of things to people. I try and say, ‘This is not Islam, this is just being people brainwashed or whatever’.. If you look at Islam, it condemns this sort of thing," he added.

Ali's political affiliations have also been under scrutiny after turning up on the second day of the third Test with India in Southampton on July 28, wearing two wristbands with the messages "Free Palestine" and "Save Gaza" on them, which got him in trouble not only with the match referee but also the International Cricket Council (ICC) which forbids players from wearing anything related to "political, religious or racial activities" during matches.

The England Cricket Board (ECB), on the other hand, supported Ali, saying in a statement that he had done "nothing wrong." Ali for his part said that he had seen other players wearing similar accessories in matches and therefore didn't think the wristbands would cause so much controversy.

Within the cricket world, Ali said he has been "very fortunate" as his team Worcestershire have given him a prayer room, time to pray, understand fasting, and actually encourage him to practice Islam - all the while pointing out that he actually played better when he was fasting during Ramadan this summer.

27-year-old Ali, whose grandmother is English, said that although he is a Muslim he is also "very happy" and "very proud" to call himself English and British and his proud to represent his hometown Birmingham on the field.

At the same time, however, Ali said: "I don’t see colour as an issue. I see everybody as being the creation of God. We’re all brothers and sisters in humanity."

Saying that he fulfilled his dream by playing for England, Ali looked to his future."One of the biggest things I’d like to achieve is to encourage other people of faith, any sort of faith, to play cricket, or professional sport, and follow your faith," he concluded.

Having at the beginning of his career faced prejudice-fill Islamophobic chants, with cricket fans calling him names like 'Bin Laden' for his very apparent Muslim appearance, Ali has now gone on to become one of the most beloved sporting icons in England as fans chant his name during his performances.

Perhaps he should be known as 'The Beard That Should Not Be Feared,' asked the interviewer jokingly, to which Ali responded, "Yeah, definitely. That’s whole beauty of it. If I can play, and change the mind of one person about being a Muslim player and having a beard, then I'll feel as if I've done my job."