Jimmy Carter said he still had hopes for peace between Jews and Muslims in the Middle East, but insisted that peace would not be realized until there was “justice and human rights for the Palestinians.” 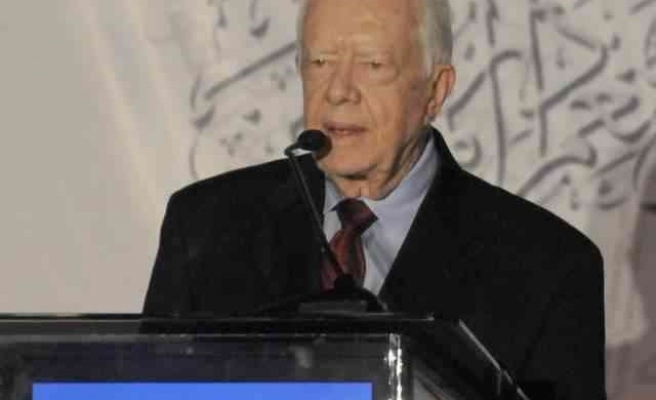 Former US President Jimmy Carter was the guest of honor at the annual Islamic Society of North America (ISNA) convention in Detroit on Saturday .

During his speech about preventing violence against women and girls to a packed audience at the Cobo Center, Carter said he still had hopes for peace between Jews and Muslims in the Middle East, but insisted that peace would not be realized until there was “justice and human rights for the Palestinians.”

Carter was applauded as he quoted verses from the Qur'an and the Bible calling for equality between men and women. “Men and women are created equally from one soul,” he said, before adding “I hope all of you will use the principals of Allah to bring peace and justice to all.”

He also used the opportunity to promote the work of his Carter Center foundation, which is involved in the negotiation protest to bring about a solution to the Israeli-Palestinian conflict which will see Israeli soldiers pulling out of occupied territories.

Carter, who in Foreign Policy earlier this month called for the US to recognize Hamas - which the US government lists as a 'terrorist' organization - as a legitimate political group, said that his foundation also meets with groups that the US government refuses to meet directly.

He came under fire for participating in the ISNA convention as the organization was labeled as an un-indicted co-conspirator and member of the US Muslim Brotherhood by the Justice department in 2007, which implicated the group in a plot to funnel $12 million to Hamas. The ISNA, however, denied the accusations.

Having written a book in 2006 that criticized Israel for enforcing a worse system of Apartheid than that which was witnessed in South Africa, Carter recently blamed Israel again for deliberately starting the current war with Gaza's Hamas government.

He also accused the Zionist state of working to block moves toward peace made by the Hamas government.

He also called for the “partial” lifting of the seven-year-old sanctions and blockade on the Gaza Strip and to allow financial aid to reach the Hamas government so that teachers, police, and welfare and health workers could be paid to ensure “a human standard of living.”