The first ever Islamic theology college in the Turkish Republic of Northern Cyprus has officially been opened after overcoming decades of obstacles. It has been named after ‘Hala Sultan’, better known as Umm Haram, an elderly female companion and relative of the Prophet Muhammad who is buried in Cyprus. 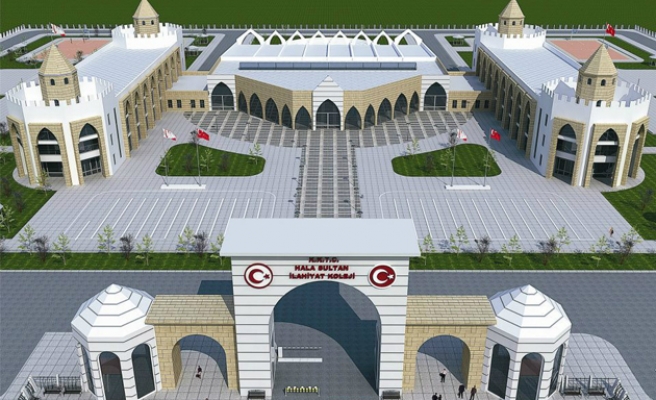 After overcoming decades of obstacles preventing its opening, the first ever Islamic theology college in the Turkish Republic of Northern Cyprus (TRNC) has officially finally been opened. Many people from both Cyprus and Turkey attended the opening ceremony of the ‘Hala Sultan Theology College’ today. The Turkish Prime Minister’s assistant, Beşir Atalay and chairman of the Union of Chambers and Commodity Exchanges of Turkey (TOBB) Rıfat Hızascıklıoğlu were also present.

Speaking at the ceremony, Beşir Atalay said: ‘We were here just over a year ago on the anniversary of the peace operation for the laying of the first brick. We deemed it significant to lay the first foundations on that historic day. In addition to opening the school, we will also lay the foundations of its remaining buildings. We will complete the complex along with the dormitory of this important facility just outside the capital city.’

As one of the most important figures to approve the school, Atalay also said: ‘This school will be one of the most important symbols of the Turkish people on this island…this school is being run by civilian initiatives. The foundations, TOBB and the Association of Sharing Knowledge are continuing to invest in the project. The mosque section of the complex will be managed by the Turkish Department of Religious Affairs. I thank each one of them. I especially thank TOBB….the name of Hala Sultan will live on in North Cyprus.’

He further went on to mention the story of a Turkish Cypriot woman known as Refika Hanım who in 1947 would spend her evening teaching Islamic classes. ‘This is a continuation of the efforts of Hala Sultan and Refika Hanım. These people who have worked to protect their religious values and identity under such difficult conditions will now have the chance to share these values with the younger generation.’

After the opening ceremony of the school, another ceremony was conducted for the laying of the foundation of a new mosque nearby.

No one wanted to see an Islamic theology college in the TRNC more than former Turkish Prime Minister Necmettin Erbakan. The late Necmettin Erbakan once told a newspaper ‘We need journalists who are aware of the importance this island carries for our nation and the Zionist plans for this island. I tried very hard to open an Islamic theology school, but every time I faced obstacles. Now there are no obstacles. Our son Tayyıp is very genuine in is efforts. He wants to open an Islamic theology college there and he has the ability to do so. Do not waver from this project. Constantly remind him of how important it is.’

It is about time that Turkish Cypriots remembered and learnt their inherited religion Islam. Northern Cyprus calls itself Islamic but the people do not even know how to do a namaz, wudu and don't even do a imam nikah when getting married. They don't even teach their children one! prayer of our religion. Shame on the Cypriot turks and about time they came back to their ancesters true religion.