Ahmas said that if an appeals court upheld the fine, she would take the case to Europe's top rights court in Strasbourg. 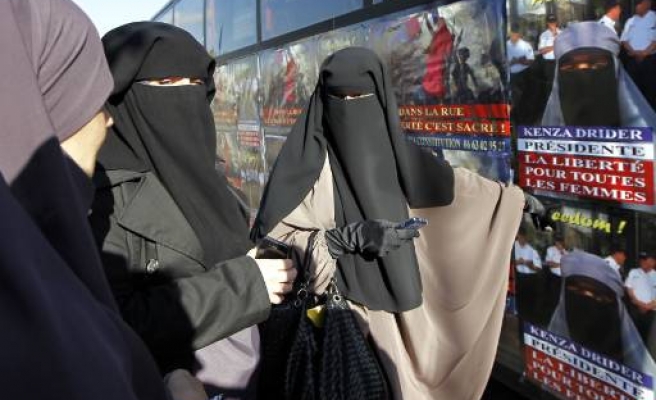 A French court on Thursday fined a Muslim woman 120 euros ($164) for wearing a full-face veil in public, prompting the single mother of three to vow an appeal to the European Court of Human Rights to get France to overturn its ban.

The woman, Hind Ahmas, said she would also appeal her sentence in a French court with the backing of French businessman Rachid Nekkaz who has pledged to pay all fines imposed on burqa wearers under the ban.

A second woman, Najate Naitali, was fined 80 euros in absentia by the court in the town of Meaux, northeast of Paris, in the first court sentencing over a defiance of the ban since it came into force in April.

"(This) violates European laws. For us the question isn't the amount of the fine but the principle. We can't accept that women are sentenced because they are freely expressing their religious beliefs," Ahmas told reporters outside the court, where a group of supporters also gathered.

"We are going to to launch the necessary appeals to bring this before the European Court and obtain the cancellation of this law, which is in any case an illegal law," she said.

In the four months since the veil ban came into force, several women have been asked by police officers to remove head-coverings and one has paid a fine issued on the spot.

The ban, first of its kind in Europe, makes public wearing of the Arabic-style niqab, which leaves the eyes uncovered, and Afghan-style burqa, which covers the face with a cloth grid, liable to a fine of up to 150 euros or lessons in French citizenship.

The law has been slammed by Muslims abroad as impinging on religious freedoms in France where fewer than 2,000 women out of a 5 million-strong Muslim community wear the veil.

Ahmas said that if an appeals court upheld the fine, she would take the case to Europe's top rights court in Strasbourg.