Hajj pilgrims gather at Arafat for Day of Prayer

More than two million pilgrims have gathered in the Arafat valley for a day of prayer, marking the pinnacle of hajj in Saudi Arabia. 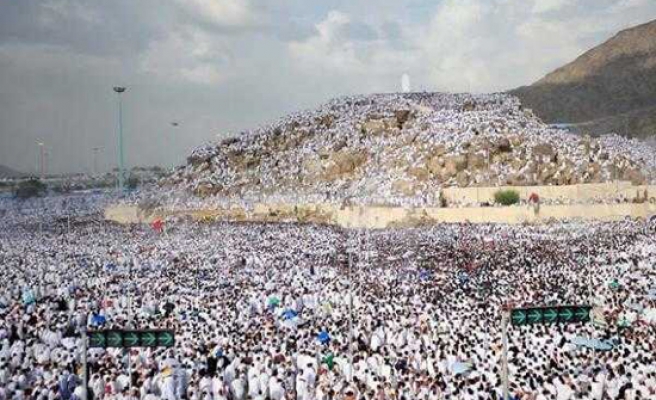 Around two million white-clad Muslims on Wednesday poured into the vast Saudi plain where Prophet Mohammed is believed to have given his final sermon, for the peak of the hajj pilgrimage.

Many of the faithful from around the globe camped at the foot of Mount Arafat where they slept, exhausted from their journey, and prayed despite the scorching sun.

Carrying colourful umbrellas, they walked from dawn in massive crowds towards the slippery, rocky hill which is also known as Mount Mercy.

Here they believe Mohammed gave his final sermon 14 centuries ago after leading his followers on hajj.

To organise the flow of pilgrims, security forces formed human chains along the roads of the vast Arafat plain.

Along the way, volunteers handed out boxes of food and cold water bottles.

For many pilgrims, hajj is the spiritual highlight of their lives.

"We feel blessed. I got goosebumps, a feeling that cannot be explained, when reaching the top of the mountain," said Ruhaima Emma, a 26-year-old Filipina pilgrim, who said she has been "praying for a good life for everyone".

For Akram Ghannam, 45, from war-torn Syria, being in Arafat is a "feeling that cannot be described. I pray to God for the victory of all those who are oppressed."

Many reached Arafat by bus while some walked from the holy city of Mecca about 15 kilometres (nine miles) away.

Other pilgrims arrived from nearby Mina using the elevated Mashair Railway linking the holy sites of Arafat, Muzdalifah and Mina, a tent city where many pilgrims spent Tuesday night.

After sunset on Wednesday they will move to Muzdalifah. There they will gather pebbles for a symbolic stoning of the devil ritual on Thursday, which is also the Eid al-Adha feast of sacrifice marked by the world's more than 1.5 billion Muslims.

This year's gathering is about the same size as last year's, with 1.4 million foreign pilgrims joining hundreds of thousands of Saudis and residents of the kingdom.

They are undeterred by a construction crane collapse at Mecca's Grand Mosque earlier this month that killed 109 people, including foreign pilgrims.

About 400 people were injured by the crane which was working on an expansion of Islam's holiest site.

Previously marred by stampedes and fires that killed hundreds, the pilgrimage had been largely incident-free for the past nine years after safety improvements.

The hajj is among the five pillars of Islam and every capable Muslim must perform it at least once in a lifetime.

This year's gathering takes place against a backdrop of increased jihadist violence in some Muslim countries, a surge of the potentially deadly MERS virus and the war in Saudi Arabia's neighbour Yemen.

About 100,000 police have been deployed to secure pilgrimage sites and manage the crowds.

Authorities say they are on alert for possible attacks by extremists, after Islamic State group jihadists bombed security forces and Shiite mosques in the kingdom in recent months.

Most Yemeni pilgrims performing the hajj this year already reside in the kingdom.

The capital saw a jump in infections last month, but health officials say there has never been a case of MERS infection among pilgrims.

The health ministry has mobilised thousands of medical workers to help ensure a virus-free pilgrimage and to care for routine ailments.

Pilgrims began the hajj on Tuesday by entering ihram, a state of purity in which they must not quarrel, wear perfume, or cut their nails or hair.

The clothing emphasises their unity, regardless of whether they spend the hajj in Mecca's five-star hotels or in shabby highrise hostels.

"I'm hoping for mercy and that Allah accepts our prayers," said Pakistani pilgrim Abdeghafour Abu Bakr, 38, who came with friends.