Singh expressed concern over increasing incidents of communal violence, stressing that anyone found guilty of such acts would be punished. 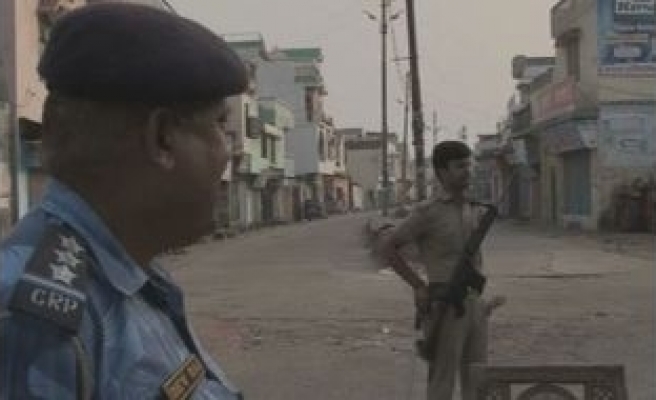 Communal violence between Hindus and Muslims, including clashes two weeks ago which killed at least 50 people in India's north, topped the agenda of a meeting Monday of an advisory body that seeks to promote communal harmony in the country.

In a spate of violence that broke out on September 7, at least 50 people were killed in Muzaffarnagar and neighboring towns and villages after a Muslim man was killed by the brother and cousin of a Hindu girl after allegedly harassing her. The two killers -- from the Hindu Jat community -- were reportedly lynched by the family of the slain Muslim and others in the locality.

Singh expressed concern over increasing incidents of communal violence, stressing that anyone found guilty of such acts would be punished.

"The government needs to take every step possible to deal with this violence," he said.

The premier said the NIC meeting was of special significance in view of the communal violence in the Muzaffarnagar district of Uttar Pradesh (UP), India's most populous state.

In an apparent dig at state lawmakers, the Indian premier said that social media was being used to fan communal tension, asserting that anyone involved in communal violence -- from any political party -- would be punished.

Three UP lawmakers, two of whom belong to the right-wing Bharatiya Janata Party (BJP), have recently been arrested and accused of making "inflammatory" speeches.

He also attempted to reassure minorities and more vulnerable segments of Indian society.

"We can't let any weaker section feel that they are not part of the mainstream," he said.

UP Chief Minister Akilesh Yadav called the Muzaffarnagar clashes a deliberate attempt to polarize voters ahead of 2014 parliamentary elections.

Referring to the 1992 demolition of the Babri Mosque in Ayodhya, UP, by Hindu activists, Yadav also blamed the Vishwa Hindu Parishad (VHP) -- a body closely associated with the BJP -- for trying to fan sectarian tensions with a controversial religious procession that Yadav had banned.

The chief minister went on to describe social media as a key platform for spreading communally sensitive material.

Nitesh Kumar, chief minister of the neighboring Bihar State, agreed. He wondered why the number of religious processions was increasing.

"Processions are now being organized when they aren't meant to take place," he said, criticizing VHP's planned procession.

Madhya Pradesh Chief Minister Shivraj Singh Chouhan, for his part, hit out at allegations against fellow BJP politicians regarding the Muzaffarnagar riots.

"Making a scapegoat of one party or group will not solve the problem" of communalism, he insisted.

In an apparent dig at Singh's ruling Congress Party, Chouhan said: "You will get votes only on the development agenda, and not minority appeasement and vote bank politics."

In 2002, Gujarat witnessed one of the country's worst-ever communal riots, in which at least 2000 people were killed.

Modi has been accused of complicity in the riots by a number of human rights groups and the case against him remains in court.

The daylong NIC meeting will also tackle the issue of women's safety and increasing instances of crimes against women.

"It is a shameful matter that women are not treated properly," the Indian premier told NIC delegates.

"I am hopeful this meeting will come up with good suggestions for dealing with violence against women," Singh said.

He added: "A country can only progress if women can move around freely and make independent choices."