History of Islam in China

The history of Islam is rooted in the very old days in China which is located in the farthest east of Asia. 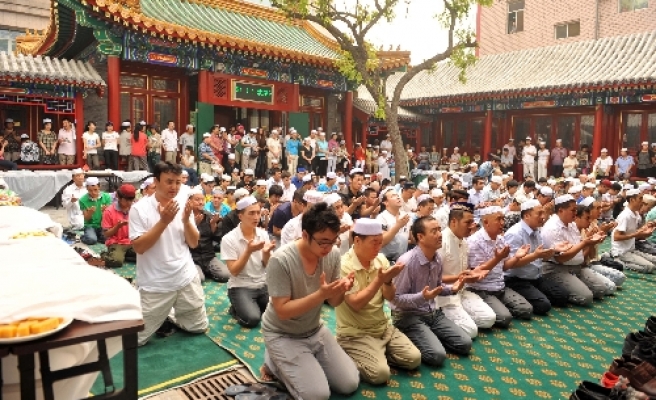 Anadolu Agency is broadcasting and presenting the "Islam in Asia" report.

AA reports from several locations including China, Indonesia, Japan, Singapore and Thailand. In this exclusive file AA will be highlighting the everyday life experiences of Muslims in Asia, their histories, ancient monuments and contacts with Ottoman Empire.

People who live in these countries have interesting stories to tell as their rooted cultures were blended with the Islamic way of living.

The greatest feature of these Muslim communities in Asian countries is that they are united very well even though they are the minority groups within most of these geographically large Asian countries.

Muslims who live in Far East and South Asia have different life styles than the other Muslims in the rest of the world. Muslims in Asia blended their life styles which was formed by the Asian culture with the culture of Islam and they managed it without abandoning the basic codes of Islam.

Islam appears in front of you in the Great Mosque of Xi'an city, a calligraphy of Quran on a plaque or at a giant mosque where 200 thousand Muslims can pray, in the furthest country of Asia, Indonesia.

One of the most features of Muslims who live in Asian countries is that they keep united all the time. Islamic societies, education establishments, close relationships between them and their solidarity take great attention.
Muslims still feel Islam after adding the mystic atmosphere and living of Asia.

Even though Asian Muslims met with Islam later on, they kept the religion ongoing. Asian Muslims' culture were influenced from mosques to education centres.

What Asian Muslims have in common is that even though they adopted Islam at different periods, they all had connection to Ottoman Empire and their relations grew when they joined the centre of caliphate during the Sultan Abdulhamid the second.

The history of Islam is rooted in the very old days in China which is located in the farthest east of Asia.
China is a home to many rare artifacts combining Chinese and Islamic culture.

China hosts a rooted Islamic culture with Great Mosque, Niucie Mosque and Huaixing Mosque in former capital Xi'an, as well as in Beijing and Guangzhou.

Official figures in the country show that 10 of 56 minority races are Muslim, and nearly 30 million Muslims are living in the country. Hui people (Chinese Muslims) are the highest Muslim population in China.

Chinese Muslims are mainly living in northern and northwestern states of China. There is a Ningxia Hui Autonomous Region in the north of the country.

Muslims have their own schools and education centers which work together with Islamic Association and Islamic Institute in Beijing.

There are 72 mosques in capital Beijing. Most of them had been built in old dates combining Chinese culture and motives with the Islamic motives.

Xi'an city, which had been the longest-time capital of Chinese dynasties, is also known with the Islamic motives it hosts.

The Great Mosque in Xi'an, which was built in 742, was taken under protection by Chinese government in 1956 as an important historical and cultural work of art. All verses of Quran were carved and imprinted on the wooden inner walls of the mosque.

The mosque has hosted over 10 million visitors including important statesmen from 100 countries so far.
Islam was first introduced in China by Sahaba (companions) of prophet Muhammad namely Sad ibn abi Waqqas (Uncle of Mohammad), and three other Sahabas.

China's oldest known mosque takes place in Guangzhou which is also a home to tombs of Sahabas. The minaret of the mosque is different from the other mosques' minarets in China. The minaret had been used as a lighthouse during the years it was built. Chinese called the mosque as Huaixing (Lighthouse) Mosque which was built in 627. It is known as one of the oldest mosques of the world.

The school was opened in one of the buildings of Niucie Mosque's social complex, and played an important role in education of Chinese Muslims. The social complex part of the mosque still serves for religious education of Muslims.
Chinese sources accept first contact between Muslim Arabs and China as in 628, while official documents show it as 651. Chinese sources said a Muslim messenger arrived in China from Arabia in 651.

First messenger was sent to China during third Caliph Osman period. The messenger had an official meeting with Chinese emperor, and briefed him about the general situation in Saudi Arabia and Islamic religion.

Talks with China continued too during Abbasids period, and the political relations between China and Arab states gained importance.

Later on, Islam spread across the country through wars and commerce.