The Independent newspaper from UK searched the transformation in the holy site and interviewed a number of citizens who expressed discontent over the way their town was changing. 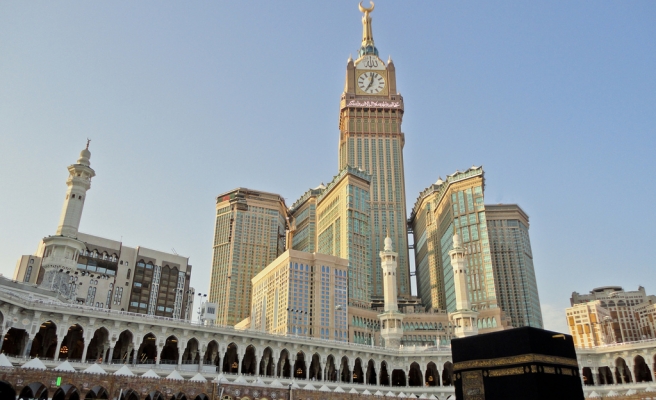 The residents of Mecca are beginning to refer to their city as Las Vegas. Over the past 10 years the holiest site in Islam has undergone a huge transformation, one that has divided opinion among Muslims all over the world.

Once a dusty desert town struggling to cope with the ever-increasing number of pilgrims arriving for the annual Hajj, the city now soars above its surroundings with a glittering array of skyscrapers, shopping malls and luxury hotels.

To the al-Saud monarchy, Mecca is their vision of the future – a steel and concrete metropolis built on the proceeds of enormous oil wealth that showcases their national pride.

Yet growing numbers of citizens, particularly those living in the two holy cities of Mecca and Medina, have looked on aghast as the nation's archaeological heritage is trampled under a construction mania backed by clerics who preach against the preservation of their own heritage.

Mecca, once a place where the Prophet Mohamed (peace be upon him) insisted all Muslims would be equal, has become a playground for the rich, critics say, where naked capitalism has usurped spirituality as the city's raison d'être.

Few are willing to discuss their fears openly because of the risks associated with criticising official policy in the authoritarian kingdom. And, with the exceptions of Turkey and Iran, fellow Muslim nations have largely held their tongues for fear of of a diplomatic fallout and restrictions on their citizens' pilgrimage visas. Western archaeologists are silent out of fear that the few sites they are allowed access to will be closed to them.

But a number of prominent Saudi archaeologists and historians are speaking up in the belief that the opportunity to save Saudi Arabia's remaining historical sites is closing fast.

"No one has the balls to stand up and condemn this cultural vandalism," says Dr Irfan al-Alawi who, as executive director of the Islamic Heritage Research Foundation, has fought in vain to protect his country's historical sites.

Sami Angawi, a renowned Saudi expert on the region's Islamic architecture, is equally concerned. "This is an absolute contradiction to the nature of Mecca and the sacredness of the house of God," he told the Reuters news agency earlier this year. "Both [Mecca and Medina] are historically almost finished. You do not find anything except skyscrapers."

Dr Alawi's most pressing concern is the planned £690m expansion of the Grand Mosque, the most sacred site in Islam which contains the Kaaba – the black stone cube built by Ibrahim (Abraham) that Muslims face when they pray.

In the eyes of Wahabis, historical sites and shrines encourage "shirq" – the sin of idolatry or polytheism – and should be destroyed. When the al-Saud tribes swept through Mecca in the 1920s, the first thing they did was lay waste to cemeteries holding many of Islam's important figures.

They have been destroying the country's heritage ever since. Of the three sites the Saudis have allowed the UN to designate World Heritage Sites, none are related to Islam.

Those circling the Kaaba only need to look skywards to see the latest example of the Saudi monarchy's insatiable appetite for architectural bling. At 1,972ft, the Royal Mecca Clock Tower, opened earlier this year, soars over the surrounding Grand Mosque, part of an enormous development of skyscrapers that will house five-star hotels for the minority of pilgrims rich enough to afford them.

To build the skyscraper city, the authorities dynamited an entire mountain and the Ottoman era Ajyad Fortress that lay on top of it. At the other end of the Grand Mosque complex, the house of the Prophet's first wife Khadijah has been turned into a toilet block. The fate of the house he was born in is uncertain. Also planned for demolition are the Grand Mosque's Ottoman columns which dare to contain the names of the Prophet's companions, something hardline Wahabis detest.

For ordinary Meccans living in the mainly Ottoman-era town houses that make up much of what remains of the old city, development often means the loss of their family home.

God does not fear men, it is men who fear men and fear their ideas, their questions, their lack of conformity.Yet laws are passed by men to prevent the flow of ideas, speech, freedoms. Particularly by one group of men in one religion.

The renowned atheist philosopher, Daniel Dennett, once remarked that Mecca in the future would be known as the "Magic Kingdom of Allah" (in a Disneyesque reference) - it seems his prediction has already come true!