Jewish settlers had scrawled anti-Arab slogans on the walls of Prophet Saleh's shrine on Tuesday. Some of the slogans called on Arabs to leave Palestine; others called for their death 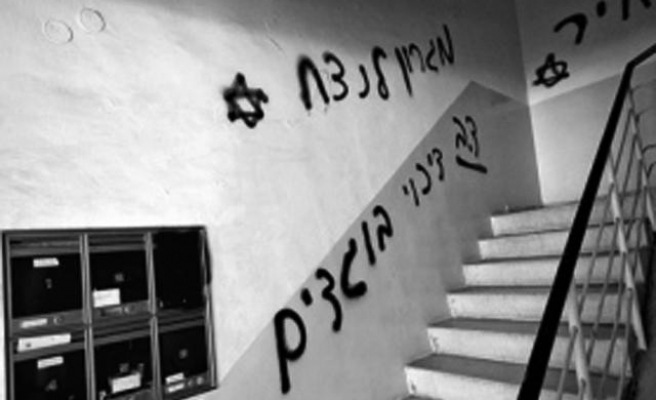 A group of Jewish settlers on Wednesday broke into the shrine of the Prophet Saleh in Ramla City some 50km northwest of Al-Quds (Jerusalem), scrawling anti-Arab and anti-Palestinian slogans on the structure, eyewitnesses said.

On the same day, another group of Jewish settlers attacked Palestinian motorists with stones north of the West Bank, according to the Palestinian news agency. No one, however, was reported injured.

Eyewitnesses told Anadolu Agency that Jewish settlers had scrawled anti-Arab slogans on the walls of Prophet Saleh's shrine on Tuesday. Some of the slogans called on Arabs to leave Palestine; others called for their death.

Witnesses said that Israeli policemen had asked local municipality officials to remove the offensive graffiti from the walls of the shrine, adding that most of the comments had been removed last night.

A media source close to the Islamic Movement in Israel said that Israeli police had prevented Arab media organizations from photographing the offensive comments.

Meanwhile, Hana Essa, secretary-general of the non-governmental Agency for the Defense of Islamic and Christian Religious Sites in Ramla City, said groups of extremist Jewish settlers had carried out three attacks against Muslim and Christian tombs – in both Ramla and Jerusalem – within the past five days.

He said the attacks had led to the destruction and/or defacement of 38 tombs.

"There were three other attacks on Muslim and Christian tombs last month, while Israeli authorities did nothing to protect them," Essa told AA.

On Tuesday, Jewish settlers attacked Palestinian motorists north of the West Bank with stones and bottles, according to the Palestinian news agency.

"Around 200 settlers blocked the road near the Mabo Dotan settlement, which is built on the town of Yabad, and threw stones at motorists," the Palestinian news agency quoted security sources as saying.

Some extremist Jewish settlers use the phrase "paying the price" to express their enmity to the local Arab population. They had used the same phrase when they damaged Arab property in the West Bank earlier.

Jewish settlers also torched and uprooted a number of olive trees, according to Palestinian officials and residents.