Thousands of Muslims said "amen" in tears as Sheikh al-Muayqali performed a qunut prayer so the bloodshed in Syria ended. 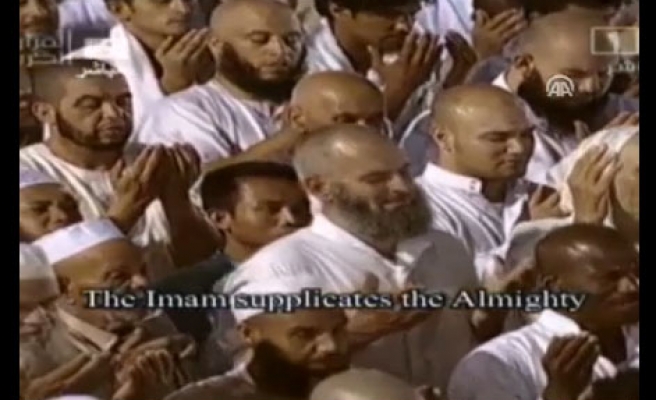 Imam of Kaaba, Sheikh Maher al-Muayqali prayed for all Muslims living under tyranny, beginning with the ones in Syria, following the tarawih prayer on Saturday.

All hands were opened in prayers for Syria at the Kaaba on Saturday.

Thousands of Muslims said "amen" in tears as Sheikh al-Muayqali performed a qunut prayer so the bloodshed in Syria ended.

Al-Muayqali began his prayer by saying "My Allah, we hold you, all angels, and creatures on land and in the skies as witness that you are the only God, that there is no other God, and Muhammad is your subject as well as your prophet".

The emotional moments of Muslims saying "amen" to each prayer of al-Muayqali were reflected on screens.

"God, do away with the problems of Muslims in the world," al-Muayqali cried to God.

"Oh, our Lord who hears us, who knows everything we hide and openly state, the holder of eternal mercy and benevolence, our God, correct the situation of the Muslims under tyranny in Myanmar, Palestine and Syria as you are the one with most mercy. My God, help them get rid of problems, end their bloodshed, give cure to their patients, make their poor rich, have mercy on their dead, and help their works," al-Muayqali said in his prayer.

"Protect them from evil that may come from their right, left, from the above and beneath. My God, I complain to you about the Jews, the tyrants and the lustful. Undo their unity and decrease their strength. My God, make us part of those whose prayers get accepted," al-Muayqali also said in his prayer.