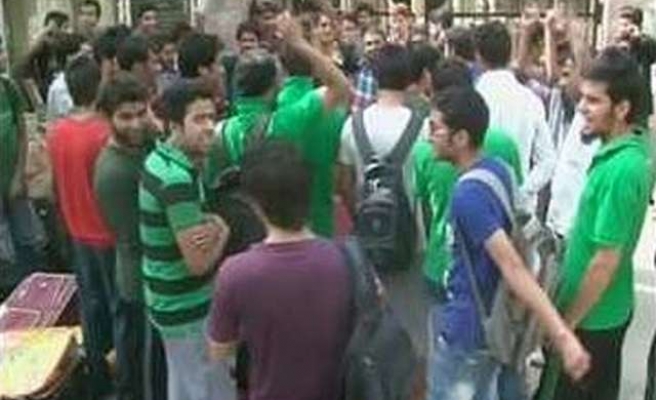 Three Kashmiri students from a private university in Greater Noida were beaten up and forced to shout “anti-Pakistan” slogans by fellow students on Saturday night, Hindustan Times reported.

The incident was almost a replay of the Meerut incident where 67 students from the occupied Valley had been suspended for cheering on the Pakistan cricket team.

According to the report, the incident occurred at an apartment block in Sector Pi in Greater Noida that serves as a common hostel for BTech students of various universities in Greater Noida. Six students, all attending private colleges, barged into the Kashmiri students’ room, beat them and forced them to shout slogans against Pakistan.

On Sunday morning, around 100 Kashmiri students residing in the common hostel protested outside the society with bags packed.

“We don’t feel safe here. Those boys were completely drunk when they entered our room. We called the police but they did not get here on time,” one of the students quoted as saying.

“Around 100 Kashmiri students of our university have been shifted to a new hostel. We are taking all measures for their safety. We have also set up an enquiry committee,” said Utkarsh Chandra, vice-president, marketing, Noida International University.