Malaysian court rules against use of 'Allah' by church

Muslim groups herald a ban on the use of the word 'Allah' to refer to 'God' in Malaysian Catholic Church weekly publication. 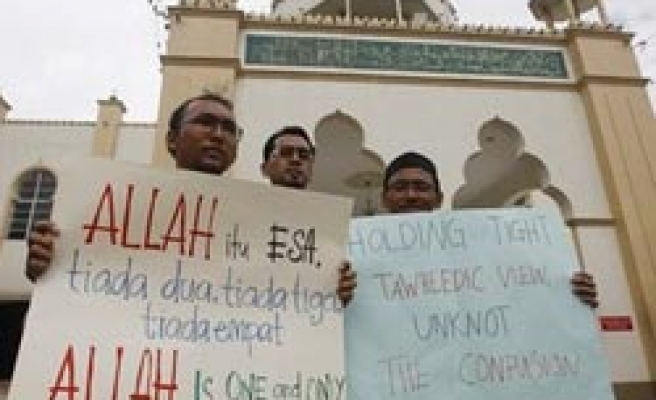 The Malaysian apex court put to an end Monday to an ongoing battle between local Muslims and the Malaysian Catholic Church over the usage of the word “Allah” to refer to "god" in a Christian weekly publication.

The seven-member bench of the Federal Court dismissed the church’s application to appeal the ban, with four of the judges siding with the Court of Appeal’s decision to ban the word in the Catholic weekly, "Herald."

The hearing was led by Malaysia's chief justice, Arifin Zakaria.

In mitigation, church lawyers argued that the word "Allah" has been used for many decades by Christians in East Malaysia, who consist of many ethnic groups. The ban would also indicate a violation of freedom and expression, it added.

Prime Minister Najib Razak has been extremely vocal with regard to freedom of the press and religious organizations since becoming premier in 2009, although many still doubt his sincerity.

He has been silent on the use of the word "Allah" since it first hit the headlines two years ago, which has not helped calm street demonstrations and other protests.

The ruling at the Palace of Justice in administrative capital Putrajaya was greeted outside with shouts of “Allahu Akbar” from a large crowd of Muslim groups.

In response to the verdict, the Catholic Church expressed disappointment with the four judges who rejected the appeal, saying it was being insensitive towards the rights of the country's minorities.

"‎The four judges who did not grant us the leave to appeal spoke about things that did not touch on fundamental basic rights of minorities‎," "Herald" editor Father Laurence Andrew told reporters outside of the courthouse.

He stressed that the church's lawyer will consider calling for a review of the decision.

The lawyer, S. Selvarajah, said the church would consider invoking a review of the federal court decision, even though this is only done in rare cases.

He said there is a provision to review the decision by an apex court, and that would be the final avenue of justice.

The lawyer also highlighted what he called "flaws" in the judgment of the four judges who did not favour the church.

‎"The three dissenting judgments, in our view, are the correct position of the law. We believe there are flaws in the four judgments which we will look at closely and decide on the next course of action," he said.