Muslim associations said in a joint statement that the recent campaign could create new areas of conflict and therefore miss the real target. 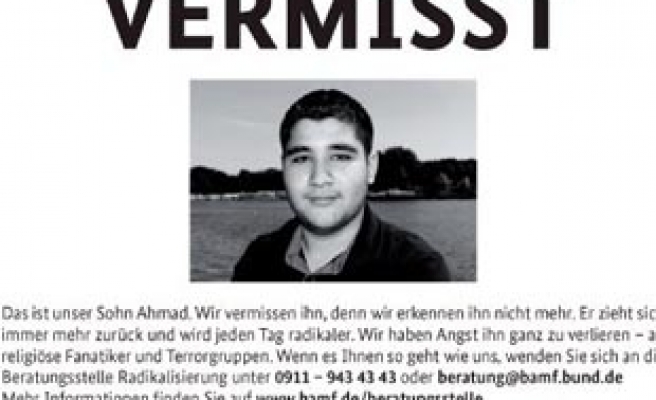 A poster campaign by the German Interior Ministry against some young Muslims who the ministry claim might be "Islamist radicals or terrorists" due to their behavioral disorder has met with strong criticism from four Islamic organizations, which have frozen their cooperation with the ministry's "Security Partnership Initiative."

On Tuesday, the four participating Muslim associations -- the Turkish-Islamic Union (DITIB), the Association of Islamic Cultural Centres (VIKZ), the Central Council of Muslims in Germany (ZMD) and the Islamic Community of Bosniaks in Germany (IGBD) -- said in a joint statement that the recent campaign could create new areas of conflict and therefore miss the real target.

The posters read "Missing" in large font above a portrait of a young man or woman, in the style of a missing person poster. Beneath the headline it reads: "This is our son Ahmad. We miss him, because we don't recognize him anymore. He is withdrawing more and more, becoming more radical every day. We are afraid of losing him altogether -- to religious fanatics and terrorist groups. If you think like me, get into contact with the counseling centers of radicalization."

The "counseling center of radicalization" was founded under the "Security Partnership Initiative", which was launched by the ministry together with Muslim associations in June 2011.

The associations said that a permanent unilateral contextualization of violence, security policy and Islam -- even if this is done with "good intentions" -- could only lead to incorrect perceptions within the society. These counterproductive patterns of action and thought, they argued, put the Muslim population -- which is a peaceful part of the German society -- under suspicion and exert social and psychological pressure. They also claimed that they expected the initiative “to join forces to take, develop and implement appropriate measures against extremism of all stripes, since they all belong to the same department.”

The Islamic Council also claimed in a separate press release against the poster campaign that the posters stigmatized Muslims and strengthened "the fear of Muslims and Islamophobia." The Islamic Council recommends the ministry "devote all its energy and power to clear up the the National Socialist Underground [NSU] terror and regain lost confidence, instead of continuing to lose it by such actions."

Also the associations asked the ministry to stop the so-called "Missing" poster campaign. Instead, the Home Office should reflect "on suitable instruments," "which serve the welfare and cohesion of the whole society,” they said.

Germany's left-leaning Green Party's North Rhine-Westphalia deputy Arif Ünal has described it a huge mistake of the Interior Ministry to focus merely on the concept of Islamist terrorists when the 20th anniversary of the racist attacks in Rostock is commemorated and NSU murders are being investigated and racist attacks escalated to such a high level.

“An Interior Minister should have taken solid steps in the fight against racism,” he said, claiming that showing all young Muslim people as potential criminals will increase the prejudices against them and will foster a culture of fear. “Also, a behavioral disorder is part of young people's development. When we look at development psychology, we see that every young men and women at the age of 15, 16 or 17 is excessively shy and introverted. It is a dangerous approach to perceive this as a sign of involving in terrorist groups,” said Ünal, who is also a therapist.

Meanwhile, Nikolaus Schneider, president of the council of the Evangelical Church in Germany (EKD), has said that Islam and Muslims are part of Germany.

Schneider has said that Muslims who bring their faith to Germany and live in this country belong to Germany, and so Islam belongs to Germany. However, Islam could have developed a cultural and social power to a very limited degree, he added.