Former Central African Republic minister says Muslim massacre in the country might draw some groups like Al-Qaeda and Boko Haram. 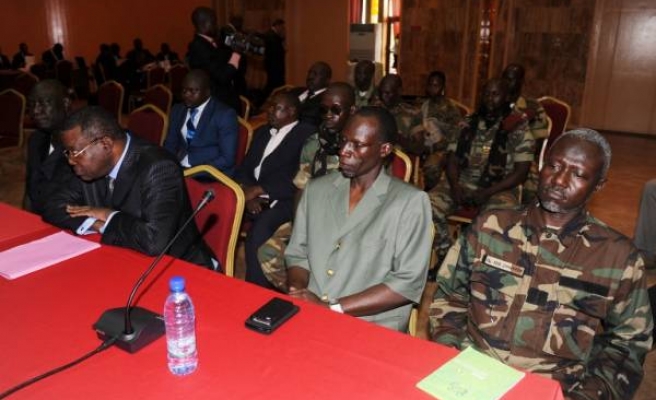 World Bulletin / News Desk
The continued killing and targeting of Muslim civilians in the Central African Republic (CAR) could draw in regional and international militant Islamist groups, a former minister has warned.

"If Christians don't stop killing Muslims, then I'm afraid groups like Al-Qaeda and Boko Haram might be drawn into this conflict," Gen. Mohamed Dhaffane, a former minister of state in the government of former interim president Michel Djotodia, told Anadolu Agency.

"I've been advising Muslims and ex-seleka fighters not to [seek] revenge against Christian attacks, but they're boiling with emotions and they will avenge [Muslims] if Christians continue killing them," Dhaffane said.

Muslims have been targeted with increasing frequency since January, when Catherine Samba-Panza, a Christian who had been serving as mayor of capital Bangui, was elected president.

Last week, no sooner had Samba-Panza left an official ceremony than hundreds of army personnel dragged a civilian from the crowd and lynched him on suspicion of being a former Muslim seleka fighter.

Seleka rebels then reportedly attacked Christian homes, looted property and carried out summary executions, leading to the emergence of the Christian militia group known as the anti-balaka.

Prior to Djotodia's resignation in January, there were 7,164 ex-seleka fighters residing in seven military bases in Bangui after being incorporated into the national army.

It's not immediately clear how many of them have since remained inside their bases and how many have slipped out.

Asked if he would support the secession of the country's predominantly Muslim north, Dhaffane said: "I don't support the idea, but there's a possibility that if the sectarian violence doesn't end, some people could attempt to divide the country."

The former minister, and one of the founders of the ex-seleka coalition, declined to reveal who exactly he meant by "some people."

Abakar Sabone, a former minister and leader of the seleka fighters, has recently threatened that Muslims in the north of CAR could secede from the rest of the country.

"If peace is not restored, independence [of Muslims in the north] will be the only solution for us," he said last week.

Dhaffane welcomed, meanwhile, any investigation by the International Criminal Court into crimes reportedly perpetrated in CAR.

"But before they arrest anyone, they should first arrest Francois Bozize, the former president, because he was the one funding the anti-balaka and turning Christians against Muslims," he said.

"After that, they can arrest Djotodia and others," added Dhaffane.

He went on to assert that military officers under Bozize had been among the first to torch a mosque in the town of Akurusubak in the Ndele province in 2009.

"The soldiers had come to the area to search for Muslim rebels," he said. "When they failed to get us, they burnt a mosque in retaliation."

Gen. Dhaffane said the current situation in Bangui could have been avoided if Djotodia had heeded advice.

"If Djotodia had followed our advice and sent back the Chadian and Sudanese mercenaries, we wouldn't have the current sectarian violence in the country," he said.

Dhaffane said he had told his former boss to hold a dialogue with seleka fighters and warn them against looting – but that Djotodia had refused.

"I told him to pay the foreign mercenaries so that they could leave, but he ignored my suggestion and the mercenaries started robbing civilians," he said.

"That's why the Christians have turned against Muslims in the country – because most of the fighters were Muslims, so they link them with the Muslim community," Dhaffane explained.

The army general recalled how once during a live radio broadcast he had criticized the looting and other crimes being committed by seleka fighters.

"When I came out of the radio station, President Djotodia called me to Camp de Roux where he lived. When I arrived he ordered my arrest," Dhaffane said.

He spent the next six months behind bars and was finally released only days before Djotodia stepped down on January 10.

The army general, who now commands respect among the 3,000 ex-seleka fighters who remain confined to a few Bangui military bases, said that, after tiring of advising president Djotodia, he went on local radio and blasted looting and other crimes being committed by seleka fighters.

"I am the one who coined the [word] 'Seleka' when I was leader of the CPSK, and the entire coalition accepted the word," he said.

"But unfortunately, Djotodia ignored my advice and instead jailed me," he added, claiming that if he had not been in jail, the current crisis would never have happened.