The 'Alpha Lambda Mu' fraternity has already started in Texas and California, and looks likely to soon open a chapter in Florida. 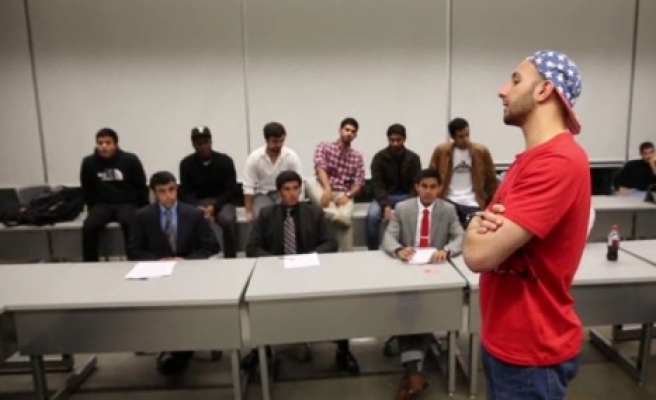 A group of Muslim students at the University of California have set up a new Muslim fraternal brotherhood called Alpha Lambda Mu, named after a Hellenization of the Arabic letters 'Alif Laam Meem' which are found in the introduction of several chapters in the Qur'an.

Fraternal brotherhoods are a very common thing among students in the US, but instead of engaging in the typical rituals of jugging down pints of beer and smoking pot, the members of Alpha Lambda Mu dress up in suits, gather to perform congregational morning prayers, and help one another to become more devout Muslims.

The fraternity is an extension to the first chapter which was set up last year by biology Ali Mahmoud in the University of Texas, with the intention of helping Muslim students express both their American and Muslim identities.

As well as volunteer work and learning life skills, the fraternity organize lectures, movie screening, outings and even sleep-over parties where they combine religious practice such as prayers and sermons with good old fashioned halal fun.

Students in Penn State, San Diego State and the University of Florida are also hoping to start chapters of the fraternity this year.

Brian Calfano, an associate professor of political science at Missouri State University who has conducted extensive research on Islamic and American identities, told the New York Times “The fraternity itself is a hallmark of the modern American college experience...In other words, these students are saying: ‘We want to live out our identity. We want to be protected within our group. But we also want to exercise our capacity to enjoy our college life.’”

The Muslim Students Association (MSA) has already been serving Muslim students in the US for many years, helping them to strengthen bonds between other Muslim students, raising awareness of Islam on campus and lobbying for Muslim causes. However, despite naturally having links to the MSA, Alpha Lambda Mu focuses more on building strong bonds between people, according to adviser Hares Sadat.