Muslims around the world have gathered in open parks and mosques, celebrating the Greater Eid, Eid ul Adha, known as the Feast of Sacrifice 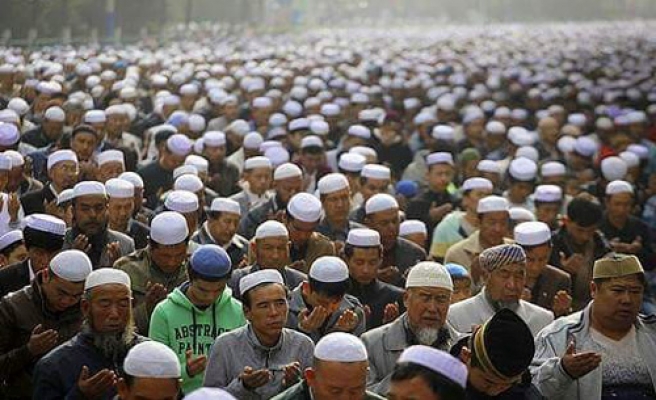 Muslims around the world have gathered in open parks and mosques, celebrating the Eid ul Adha, known as the Feast of Sacrifice, the Greater Eid.

Eid al-Adha, this year is observed from the evening of Sept. 23 and usually lasts for four days. One of two feast festivals celebrated by Muslims, Eid al-Adha falls on the 10th day of the Islamic calendar’s last month, Dhu al-Hijjah.

Muslims celebrate the holiday to commemorate their belief in Abraham's willingness to follow God's command to sacrifice his son Ishmael, and Ishmael's consent to being sacrificed. Today, it is is marked by slaughtering animals to feed the poor. Coming at the end of the hajj, a journey of dedication and purification, the Eid is seen as an opportunity for purification and a reinstatement of faith.

In a symbolic act, those who can afford to, slaughter a cow, goat, sheep or camel - keeping a portion for their own family and then distributing the remainder to friends, family and the needy. Those who can't afford it purchase a smaller amount from a butcher to distribute. Giving out this meat, in addition to the morning prayers, is considered an essential component of Eid al-Adha.

During the Hajj, men and women enter a state of ihram - a ritual state of purity which is aimed  shedding symbols of materialism, giving up worldly pleasures and focusing on the inner self over outward appearance. Sexual intercourse among spouses is not permitted when one is in a state of ihram, neither is trimming hair or nails.

The white ihram garments are forbidden to contain any stitching — a restriction meant to emphasize the equality of all Muslims and prevent wealthier pilgrims from differentiating themselves with more elaborate garments.

It is also forbidden for pilgrims to argue, fight or lose their tempers during the hajj. Inevitably, though, the massive crowds and physical exhaustion of the journey test pilgrims' patience and tolerance.

No annual event on the face of the globe, religious or non-religious, compares to hajj in terms of the sheer number of participants, the length of the event itsel and the breadth of agenda. In its essence, the hajj is man’s evolution toward Allah; his return to Him. Beyond class or status, for millions it has become the symbol of the unity of brotherhood.

World Bulletin has collated a number of images from around the world showing the Eid and its how its celebrated from country to country.

In India, henna decorations are part and parcel of Eid