It is a time to give to those in need and celebrate the end of the month of blessings and joy with family and friends. 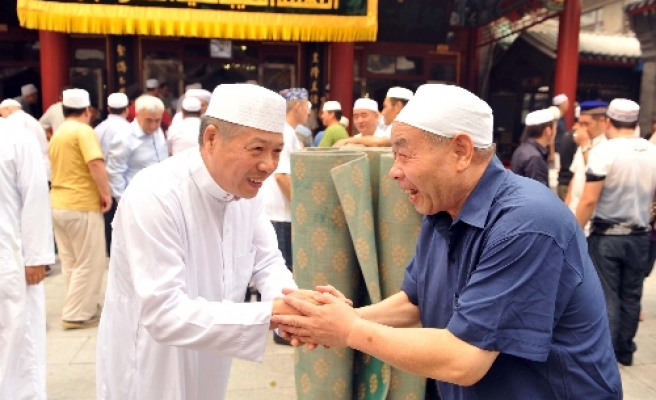 Muslims across the globe bid farewell yesterday to the holy month of Ramadan, deemed the most blessed and valuable of all months, and welcomed Eid al-Fitr, the three-day holiday that marks the end of the month of fasting.

Eid is an Arabic term meaning "festivity" or "celebration," while fitr means "to break the fast" and can also mean "nature" from the word "fitra." Eid falls on the first day of Shawwal, the month that follows Ramadan in the Islamic calendar.

It is a time to give to those in need and celebrate the end of the month of blessings and joy with family and friends. On the first day of Eid, Muslims wake up very early and perform the dawn prayer. Afterwards, they eat a small meal, a symbolic act that reminds them that Ramadan is over. They then gather in mosques to perform the Eid prayer.

Worshippers greet and hug one another in the spirit of peace and love after the congregational prayer in celebration of one another's Eid. They later disperse to visit their friends and family, give gifts to one another and call distant relatives to send good wishes for the holiday. Eid lasts for three days and is generally an official holiday in Muslim countries.

Muslims around the world share in the great blessing of the tranquil and spiritual Eid morning. It is a joyous occasion of important religious significance, celebrating the increase in piety with which God blesses the world during the month of Ramadan. It is a day of forgiveness and moral victory as well as of brotherhood and unity.

Muslims celebrate not only the end of fasting, but also thank God for the help and strength that he bestowed upon them throughout the month of fasting, during which they endured their fast with physical and spiritual asceticism -- that is, they have controlled their stomachs, their tongues and their hearts, so they have successfully passed the test of servanthood. It is a time of giving and sharing.

Muslims put on their best clothes, called "bayramlik" in Turkey, often purchased just for the occasion. They visit loved ones and pay their respects to the deceased in cemeteries.

Young ones kiss the right hand of the elderly and press it to their forehead as a gesture of respect. Children go around their neighborhood to wish everyone a happy Eid and collect candy and chocolate. Guests are offered traditional sweets such as baklava and lokum (Turkish delight). Young visitors are generally offered a small amount of money.

Television and radio stations broadcast a variety of special Eid programs, which include movie specials, musical programs and celebratory addresses from celebrities and politicians.

Eid is more than a religious festivity for Turks, who also associate it with sweets and candy. A centuries-old tradition of offering sweets to guests during Eid al-Fitr has led to this festivity being called Seker Bayrami, with "seker" meaning sugar or sweet in Arabic and Turkish.

Candy store owners and patisseries await Eid with great expectations as the festivity brings with it an increase in sales and, therefore, rising profits. They begin preparing months before the occasion and try to attract customers with colorful and delicious delicacies.

Officials have warned drivers to be more careful when driving during the Eid, saying roads and highways will be more crowded than usual. They noted that the number of casualties in traffic accidents significantly rises during these vacations, calling for greater attention and full compliance with traffic regulations. Drivers are particularly being cautioned to avoid drinking and driving as well as speeding.

Free travel services across the country in Eid

According to an announcement made by the Cabinet in Turkiye on Monday published in the Official Gazette, transportation options provided to the public throughout the country will be free of charge during the holiday.

The Cabinet announcement stated that toll roads will be free from Aug. 27 to Sept. 5.

Buses owned by municipalities will be completely free during the three days of Eid.

In addition, travelling with the new high-speed rail link that connects Ankara with the central Anatolian city of Konya, which has been free since it was opened by Prime Minister Recep Tayyip Erdogan on Aug. 23, will continue being free of charge until Sept. 5.