Muslims across the world began to celebrate the holiday of Eid al-Fitr on Thursday, beginning the day with morning prayers. 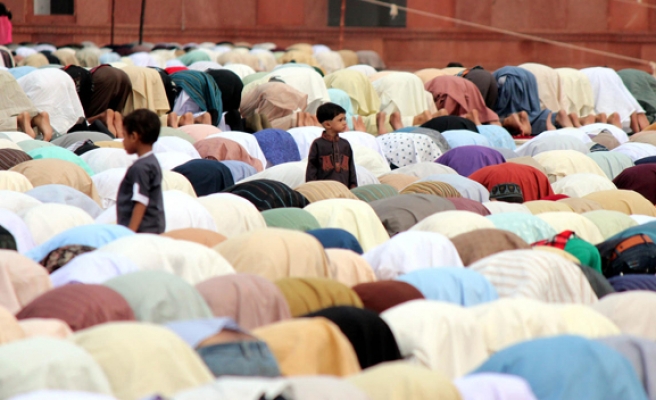 Muslims across the world began to celebrate the holiday of Eid al-Fitr on Thursday, beginning the day with morning prayers after one month of fasting.

Eid al-Fitr is an Islamic holiday which follows the holy month of Ramadan, during which Muslims fast from sunrise to sunset.

Around two million Muslims performed their Eid prayer at Masjid al-Haram in the sacred city of Mecca on the first day of Eid al-Fitr marking the end of the holy month of Ramadan.

Amid strict security measures, King Abdollah of Saudi Arabia along with several high ranking Saudi officials were present at the Eid prayer at Masjid al-Haram, the largest mosque in the world surrounding one of Islam's holiest places, the Kaaba.

As of midnight, Muslims rushed to the masjid, filling up all the four stories of the Masjid al-Haram around al Kaaba before the morning prayer.

The entry to the masjid was blocked at morning prayer time.

Muslims had a hard time performing the circumambulation of the holy Kaaba beacuse of the squash of Muslim preachers.

Meanwhile, the new bridge built to prevent the jam in the circumambulation area of Kaaba where 7 thousand people would have the chance to circumambulate eased the prayer and other religious duties of Muslims on the first day of Eid al-Fitr.

Tens of thousands of worshippers gathered at the Sultanahmet Mosque in Istanbul.

Worshippers who could not find room to pray in the mosque gathered around the mosque and the surrounding of the Hagia Sophia Museum to pray.

Due to lack of space, Istanbul Metropolitan Municipality officials handed disposable prayer rugs for worshippers to pray on.