Muslims living in hot weather and bad conditions continue to fast and teach the holy Qur'an in small homes built of tree branches. 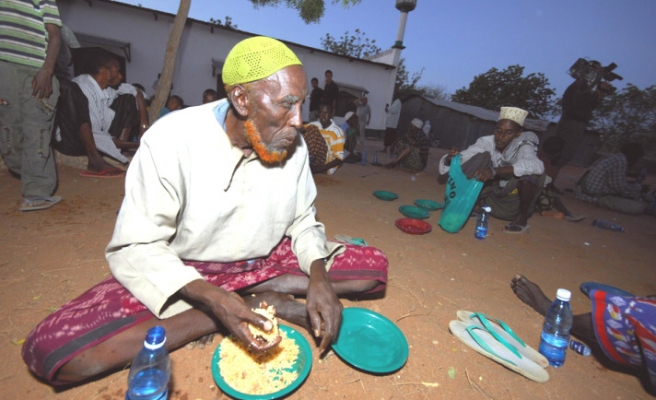 Muslims living in refugee camps on the Kenyan-Somali border fast during the holy month of Ramadan despite the extremely hot weather.

The Dadaab Refugee Camp on the Kenyan-Somali border is one that thousands of hungry and thirsty individuals walked to for days in order to find food and water.

Muslims living in hot weather and bad conditions continue to fast and teach the holy Qur'an in small homes built of tree branches.

Officials from Turkey's Humanitarian Relief Foundation, or IHH, are providing fast-breaking meals to the refugees in the camp. The fast-breaking dinners include water, dates and rice.

Journalists and officials providing aid from Turkey have to live in tents.

Meanwhile, children in the refugee camp try to get educated in booths made out of tree branches and plastic bags.

There is only one pencil and notebook per four students.

Teachers in front of black boards in all corners are making efforts to educate the children.

Meanhwile, a total of 171.5 million Turkish liras (approx. 100.1 million USD) have been collected in a Turkish aid campaign for famine stricken Somalia as of 17.00 hours on Monday.

In a statement posted on its web site, the Turkish Prime Ministry Press Center said that the aid campaign was started upon a directive from Turkish Premier Recep Tayyip Erdogan.

Part of the ongoing donations will be utilized for other African nations aside from Somalia.

Famine in Eastern Africa badly affects especially the children. Somali children who are undernourished face many types of diseases.

According to a report prepared by Turkey's Humanitarian Relief Foundation, or IHH, on Eastern Africa, Somalia experienced domestic clashes, battles among tribes, political and economic instability and mass migrations since 1991 when a civil war erupted in the country.

The report stresses that around four million people in southern portions of Somalia are in need of urgent food items and this number continues to get bigger every passing day.

The report indicates that many children and adults die every day due to famine.

Somali refugees living in the Dadaab Refugee Camp on the Kenyan-Somali border at times quarrel with armed forces who take a role in the distribution of food items sent by the IHH, including rice, liquid oil, flour, milk and biscuits.

Many women who carry their little children on their back have to wait under the sun for hours in order to receive the aid materials supplied by the IHH.

Many children who have to wait for food items with their mothers under the sun face diseases caused by malnutrition.

Officials at the camps try to assist women and the elderly who come to receive food aid.

Women, children and the elderly have to wait in long lines in front of water storages due to the drought.

Water taken from water storages are being carried by donkeys.

Volunteer doctors try to help the refugees as the hospitals in the region are not sufficient for the whole population.

United Nations (UN) officials in the region point out that children younger than the age of five are dying due to famine.

UN officials also state that four million people in the region are under the threat of famine and 12 million children need urgent aid materials.

Somalia, Kenya, Ethiopia and Djibouti, also known as "the Horn of Africa", are facing the worst drought in 60 years. The rainfall in Kenya's capital of Nairobi two days ago made the regional people happy.