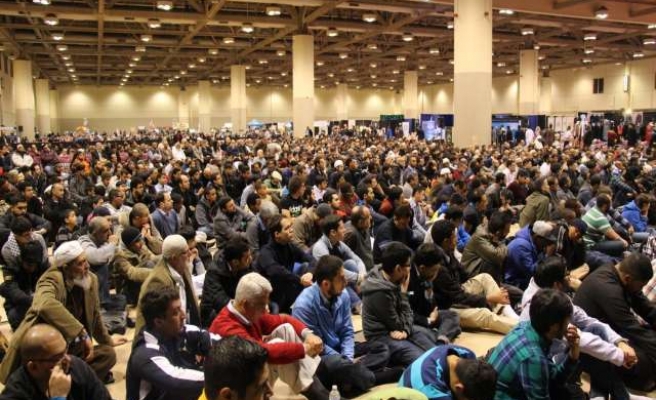 The North American continents second largest Islamic organisation RIS (Reviving the Islamic Spirit) Convention 2014 has brought together thousands of Muslims from around the globe, which has begun at the Toronto Metrol Convention Centre in Toronto Canada and will end on the 28th December.

With thousands of people congregating at the centre, it is also playing host to many Muslim foundations, associations and companies from different Muslim cultures. From Mauritania there is Abdullah bin Bayyah, from USA Huseyin Nasr, Malcolm X's daughter Shabazz, Muhammed Ninowy, Munir El-Kasim, Hamza Yusuf and Zahir Mahmoud from the UK, as well as well known artists, including Sami Yusuf who will give a concert on the last day.

The Metro Convention Centers hall caters for the visitors from the early hours in the morning until the late hours, with conferences throughout the day. To make it easy for the visitors, one level has been modified to provide child care. To meet the food needs, a kitchen has been provided giving different foods from every culture.

For the prayer needs, the masjid is available, and since the first day thousands came together to pray the Friday congregational prayer. There is also an open market in the exhibition space, selling books, decorations, and Islamic wedding organisers take their places in stands. RIS 2014 is also taking advantage of further visitors who are on holidays for Christmas.

Event director Sumayyahh Poonah said that RIS started for the first time after the September 11 attacks with a group of young students and has said that it has grown significantly in the past 13 years, and that “Last year we had 20,000 visitors and we do not expect that number to be any less this year”. Themed, “He Came to Teach you your Religion”, Poonah said, “Throughout RIS, thousands of guests and visitors from North America and the Middle East will read and learn of this message”.

The other main point of interest is the Islamic marriage service that has been serving Muslims for the past 10 years. Named IMAP (Islamic Matrimonial Assistance Program), director Muhammad Zainul said that in the past ten years thousands of single Muslims have used the service to get married in an Islamically appropriate way to their spouse. “We provide this service completely as volunteers. For two Muslims to come together and have a happy home is sufficient for us”.