"Rumours of extensive mineral wealth in Rakhine State would add or perhaps are now adding fuel to the existing ethnic tensions," said the Harvard Ash Center in a July 2013 report. 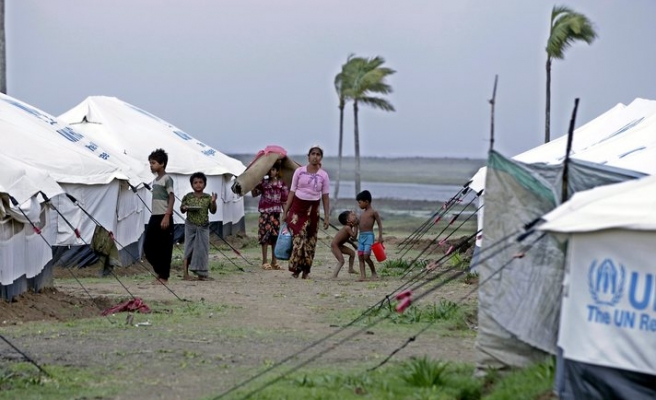 Attempts to bring stability to Myanmar's strategic northwest Rakhine State could be unravelling after police opened fire on Rohingya Muslims for the third time in two months, reviving tensions in a region beset by religious violence last year.

Villages outside the state capital Sittwe remain volatile after a dispute over custody of a dead Rohingya quickly escalated into a day of clashes on Friday in which police raked Rohingya crowds with gunfire, according to witnesses.

The violence underscores the growing Rohingya desperation in the face of an increasingly unsparing police response. At least two people were killed and more than a dozen injured, locals said.

The battered corpse of the fisherman washed ashore at Ohntawgyi village after Friday morning prayers, triggering a day of clashes in which police raked crowds of Rohingya with gunfire.

A military intelligence source in Sittwe put the toll at one dead and nine injured, while the state-run New Light of Myanmar newspaper said only three people had suffered "minor injuries".

Activists blamed the clashes on restrictive measures imposed after last year's violence in the Buddhist-majority country.

Apartheid-like policies have segregated Buddhists from Muslims, many of whom fester in primitive camps for internally displaced people (IDPs) with little hope of resettlement.

A Reuters photographer and video journalist who visited the area said the situation remained tense as Tomas Ojea Quintana, U.N. special rapporteur on human rights in Myanmar, arrived in Sittwe on Monday.

The clashes heap pressure on President Thein Sein as he struggles to contain nationwide religious violence since taking power in March 2011 after nearly 50 years of military dictatorship.

Rakhine State is one of Myanmar's poorest regions, but in the reform era it is emerging as one of its most strategic.

In Sittwe's harbour, India is funding a $214 million port, river and road network that will carve a trade route into India's landlocked northeast. From Kyaukphyu, a city 105 km (65 miles) southeast of Sittwe, gas and oil pipelines stretch to China's energy-hungry northwest. Both projects capitalise on Myanmar's growing importance at Asia's crossroads.

"Rumours of extensive mineral wealth in Rakhine State would add or perhaps are now adding fuel to the existing ethnic tensions," said the Harvard Ash Center in a July 2013 report.

Aung Win, a well-known Rohingya activist who visited the troubled area on Sunday, blamed the unrest on deteriorating relations between the displaced Rohingya and police.

Rohingya blamed the police for beatings, extortion and other "inhuman" treatment, he said. "People have no trust in the police anymore," he said. "They want the police out of their areas and the military there instead."

The IDPs also demand the release of Rohingya leaders detained since late April after violent protests at a camp near Sittwe over a government resettlement plan.

The plan required the stateless Rohingya to identify themselves as "Bengali", a term Rohingya reject. The government says they are Muslim migrants from Bangladesh and denies them citizenship. ManyRohingya say their families have lived in Rakhine for generations.

As tempers rose on Friday, Rohingya villagers and IDPs burned down a police outpost in Ohntawgyi and erected a nearby roadblock, witnesses said. Police fired rubber bullets, tear gas and live rounds. The IDPs fought with sticks and catapults.

In two townships, Buthidaung and Maungdaw, the state government recently announced the enforcement of a two-child limit on Rohingya families, one of several measures that the United Nations has called a violation of human rights.

The violence near Sittwe follows two other recent instants of fatal police gunfire in Rakhine.

On June 4, three Rohingya women were shot dead by police in Mrauk-U township, said U.N. envoy Ojea Quintana who arrived in Myanmar on Sunday. In June, he called it "the latest shocking example of how law enforcement officials operate with complete impunity" in Rakhine.

Then, on June 27, two IDPs were killed and six wounded when security forces opened fire on a crowd outside a military post in Pauktaw township, according to the UNHCR.

Rakhine State government spokesman Win Myaing blamed the Rohingya for Friday's violence, which he said was timed to coincide with the U.N. envoy's visit.

"They want to show to the international community the Rakhine State government is neglecting them," he told Reuters.

Ojea Quintina was met in Sittwe by Rakhine Buddhist protesters wearing T-shirts reading "Get Out" and carrying signs labelling him a "Bengali Lobbyist".