Burmese Nationalist Youth to distribute leaflets and CDs urging boycott of Qatar-owned phone company because it is based in an Islamic country. 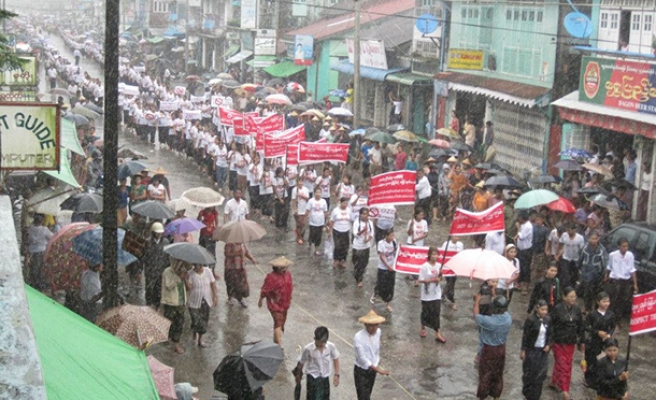 Nationalist monks in Buddhist-dominated Myanmar are to launch a campaign to boycott a Qatar-owned telecommunications company on Saturday because it is "from an Islamic country."

U Parmaukha, a radical Buddhist abbot based in Yangon, Myanmar’s main city, told the local Irrawaddy news website this week that the boycott has been organized to “protect the integrity” of Myanmar and Buddhism.

“We doubt that we will have freedom when talking over their mobile network because the company is from an Islamic country,” he added.

The boycott is of Ooredoo, a telecoms giant owned by the Qatari government - one of two foreign firms - the other being Norwegian firm Telenor - awarded contracts to run mobile phone services in the impoverished Southeast Asian nation last year.

Decades of isolation under a military dictatorship that enforced eye-watering prices for SIM cards to clamp down on communications considered dangerous to state apparatus turned Myanmar into one of the least connected countries in the world.

But a reformist government installed in 2010 now hopes to bring mobile phones to the masses, and wants three quarters of the country’s roughly 60 million citizens to own the devices by 2015 - the year of a landmark general election.

The recent reforms have seen Myanmar undergo widespread economic liberalization – but have also been blamed for unleashing a wave of anti-Muslim violence - Rohingya Muslims are believed to form around 4 percent of the population.

A group called the Burmese Nationalist Youth will start distributing leaflets and CDs in Yangon on Saturday urging people not to buy Ooredoo’s SIM cards when they go on sale at some point from July. They also want supporters to refuse to answer calls from people using the company’s services.

Wali Ullah, a Muslim activist based in Yangon, said the boycott could “damage national development” and called on Myanmar’s government to intervene.