In black letters, the signs read, "No Muslim parking in the Westview Shopping Center. Your car will be towed." 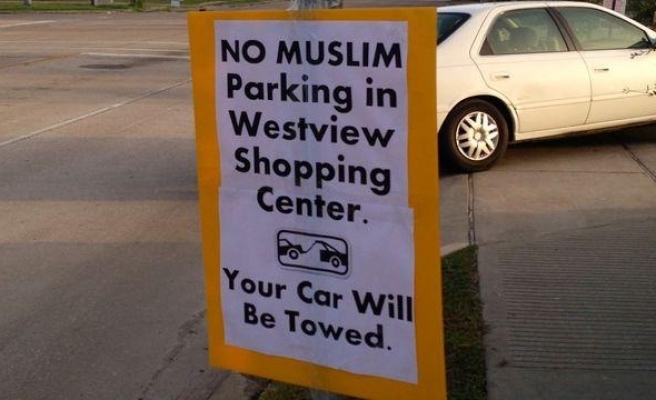 The posters lined the street near the El Farouq Mosque. In black letters, the signs read, "No Muslim parking in the Westview Shopping Center. Your car will be towed."

"I'm very shocked because we do live in a society that's supposed to be very accepting, and this is what we all preach," Yara Aboshady told CNN affiliate KPRC on Friday.

"That we all have the freedom of religion."

The shopping center's employees refused to talk to media or admit who put the signs.

One worker, however, said the shopping center owner, Steve Kwon, posted the signs.

"I did not put up the signs," Kwon said.

After speaking with KPRC, Kwon removed the signs.

All across the US, mosques have been facing fierce opposition recently.

Requests by Muslim residents to build mosques have repeatedly been denied on different grounds ranging from local opposition to zoning problems.

But Muslims see the repeated denials of their worship places as a reflection of the growing animosity against their minority since the 9/11 attacks.

i understand that th Masjid is next to a shopping center and the owner of the center has put the sign because Muslims are parking their cars in his lot. Although i'm a Muslim, I don't thing it is anti-Islamic. He didn't know any better how to express it, he wanted people who come to the Masjid to stop parking in his lot. Friday prayers can be quiet crowded. unless i'm missing something.. Salaam