Thousands protested against a spokesperson's defense of decapitation ‘as a way of executing war criminals.’ 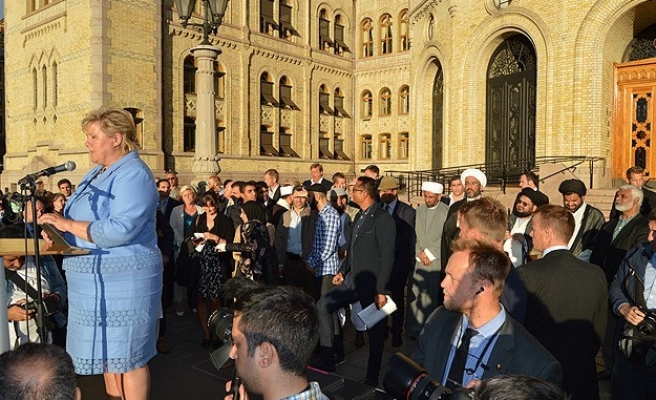 Thousands of people from all walks of life gathered outside the Norwegian capital’s Parliament building late Monday to show contempt for statements made by a spokesperson for a hardline Islamist group who had defended decapitation "as a way of executing war criminals.”

Demonstration organizer Yousef Gilani said that the march was arranged to show that Ubaydullah Hussain’s "hate speech" and support of the self-proclaimed Islamic State (IS) - a militant group that has seized parts of Syria and Iraq - was not symbolic of the country’s Muslims.

Gilani is from the Liberal Party, which is presently in a governing coalition with the Conservative and the Progress parties.

“Lately we have been witness to hateful messages being spewed by certain organizations in the name of Islam and we gathered here to take back our city and say a clear 'no' to extremism,” he said.

All around, demonstrators stood waving banners emblazoned with such messages as “No to ISIS” and “Not in Islam's Name.”

"This is multiculturalism in Norway today, showing that we are all gathered today to stand by the country as one and defend the values of the society we live in," he added.

He described decapitation as a "merciful" way of executing war criminals, and called for Muslims to follow Sharia law.

Hussain is from the "Profetens Ummah," a radical group in Norway that was behind the 2012 protest at the U.S. Embassy in Oslo - over the controversial “Innocence of Muslims” anti-Islam movie - during which there was a tribute to Osama Bin Laden.

With many in Norwegian society appalled, the demonstration was organized, Husain then saying that Muslims who planned to join were "ignorant" and "had little knowledge."

These people "must read more about Islam and its history," he added.

“A good society is built when we show that we disagree with and loathe organizations such as ISIS [IS],” said Solberg.

Fellow organizer Faten Mehdi Al Husein, 19, moved those gathered with a passionate speech in which she referred to Profetens Ummah as the “Devils Ummah.”

Islamic State is a militant group formerly known as the Islamic State of Iraq and the Levant (ISIL or ISIS). It has driven an estimated 1.2 million Iraqis from their homes in a humanitarian crisis that has engulfed the country since an uprising by the group began at the beginning of June.

On August 19, the group uploaded a video onto Youtube of what is understood to be the beheading of U.S. journalist James Foley - seized in November 2012 in northwestern Syria - although no body has been found.

The U.S. has conducted dozens of airstrikes on IS forces since August 7.