An open-air mosque that was built after the Ottomans captured the province of Bursa hosted the first terawih prayer in 600 years on Sunday night. 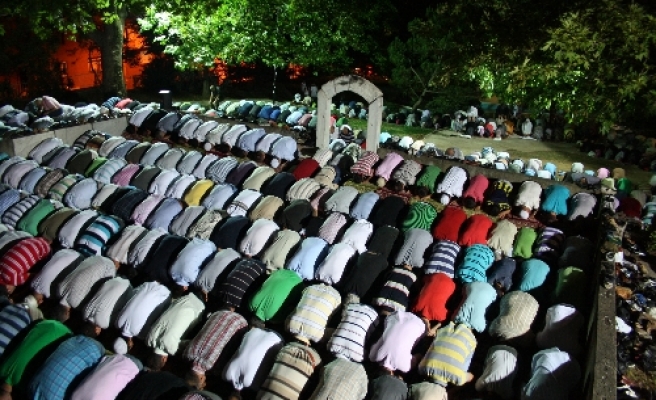 An open-air mosque that was built after the Ottomans captured the province of Bursa hosted the first terawih prayer in 600 years on Sunday night.

Many Bursa residents flocked to the mosque, where the Ottoman army prayed before and after military expeditions, for the first terawih prayer. The outdoor mosque was prepared to serve Bursa thanks to efforts by the Bursa Municipality and Nedim Serbestol, the mukhtar (local official) of the Namazgah neighborhood, where the mosque is located. Authorities from Bursa's Yıldırım district also appointed an imam to the mosque to serve throughout Ramadan.

The marble mihrab and minber of the mosque were lit for the occasion and a sound system was set up for the first terawih. Thousands of Bursa residents lined up for the prayer under the shade of plane trees. Bursa Mayor Recep Altepe and Osmangazi Mayor Mustafa Dündar were also in attendance on Sunday evening. Many said they were unaware that Bursa had such a mosque and expressed their joy with the newfound interest in the mosque. They said it was much easier to pray outdoors during the summer and that they will continue visiting the mosque throughout Ramadan.

Bursa Mayor Altepe said his team is working to revive the historical identity of the city. Recalling that the first six sultans of the Ottoman Empire resided in Bursa, Altepe said the mosque was also one of the first places for the army to pray. He added that they plan to restore the mosque after the municipality's Council of Monuments grants its permission.

Turkey welcomed Ramadan with the first terawih prayers on Sunday evening, followed by the first day of fasting on Monday. Hüsrevpaşa Mosque, built by world-renowned Ottoman architect Mimar Sinan in the eastern province of Van, hosted the first terawih prayer in 97 years. The mosque was constructed in the name of Koca Hüsrev Paşa, a governor of Van during Ottoman times. It was seriously damaged during World War I. The restoration of the mosque has recently been completed. The first terawih prayer in the mosque was attended by Van Governor Münir Karaloğlu and Justice and Development Party (AK Party) Van deputies Burhan Kayatürk and Fatih Çiftçi as well as thousands of Van residents.

Following the prayer, visitors were presented with irmik halva and sherbet. Governor Karaloğlu told reporters that they are happy to open the mosque for terawih prayers. "Historic parts of Van have many similar edifices. We must conserve them. This is our responsibility," he added.

In İstanbul, the historic Sultanahmet (Blue Mosque), Eyüp Sultan and Süleymaniye mosques were crowded with visitors before the prayers even began.

Edirne residents came out to the Selimiye Mosque, another masterpiece by Sinan, for the terawih prayer. Hundreds of İzmir residents were at the Hisar Mosque for the first terawih of this year's Ramadan.

Muslims all over the world have embarked on a month of reflection, purification and abstinence from eating and drinking from dawn to sunset. The world's 1.2 billion Muslims, around one-fifth of the human population, began today this year's observance of the Ramadan fasting season, obligatory for all adult and physically fit believers and regarded as one of the five pillars of the Islamic faith. This holy month is celebrated throughout the entire world with great enthusiasm and joy as a wonderful opportunity to remove all cultural and geographical obstacles that stand in the way of the unification of the entire Muslim population around common sacred values.