The players refused to remove their headscarves, saying it violated their religious beliefs and they wanted to send a strong message to the sport's governing federation that the ban was unfair. 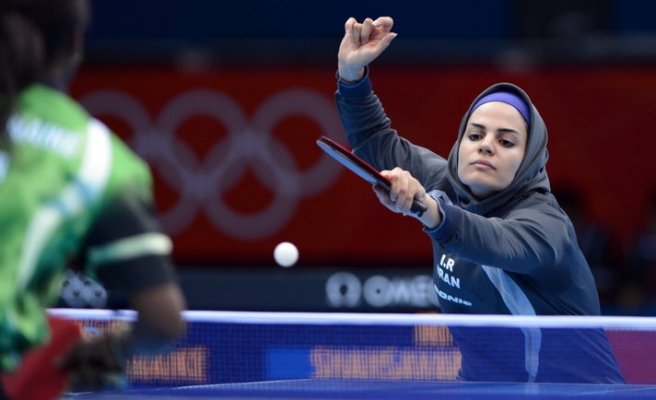 The Qatar women's basketball team forfeited a game at the Asian Games on Wednesday after being refused permission to wear the hijab, saying they were taking a stand against what they say is a discriminatory policy against Muslim women.

The Qatari players were asked, in accordance with International Basketball Federation's rules, to remove their headscarfs in order to play against Mongolia.

However, the players refused, saying it violated their religious beliefs and they wanted to send a strong message to the sport's governing federation that the ban was unfair.

"We have to take this stand," said Ahlam Salem M. Al-Mana of Qatar. "We are here to push the international association that all Muslim teams are ready to compete in any competition.

"We knew about the hijab ban, but we have to be here. We have to show everyone that we are ready to play, but the International Association is not ready."

A spokesperson for the Incheon Asian Games (IAGOC) told Reuters that organisers had no alternative other than to declare a forfeit because, "the rule that the players broke is International Basketball Federation rule 4.4.2, which talks about uniforms and what players can wear.

"The technical official asked them to remove the scarf and they refused, so the game was forfeited by Qatar."

The Olympic Council of Asia (OCA) said in a statement that it was the duty of sports governing bodies to protect the rights of competing athletes.

"The right of the athletes must be the highest priority," said OCA Director General Husain Al-Musallam.

The director general added that FIBA had had years to resolve the issue with its Asian body and that sports federations had a duty to let athletes "exercise their right of freedom of choice with dignity."

The use of hijabs has become a hot topic in sport in recent years with muslim athletes complaining that they are being discriminated against.

Human rights groups and the United Nations joined forces to put pressure on sporting bodies to lift the bans.

Earlier this year, the International Football Association Board (IFAB) unanimously overturned a ban on the garments, allowing soccer players to wear them.

They had previously been banned due to "safety concerns" and because they were not recognised in the laws of the game. But FIFA medical reports showed there were no safety concerns.

Other sports at the Asian Games allow athletes to wear the hijab. All four members of the Iranian lightweight women's quadruple sculls team wore it as they rowed to a bronze medal on Wednesday.

Basketball remains one of the exceptions although FIBA said earlier this month that it had held discussions on the issue and was introducing a two-year 'testing phase' on what players can wear.

"Relaxing the current rules regarding headgear in order to enable national federations to request, as of now, exceptions to be applied at the national level within their territory without incurring any sanctions for violation of FIBA's Official Basketball Rules," FIBA explained.

"National Federations wishing to apply for such an exception to the uniform regulations shall submit a detailed request to FIBA. Once approved, they shall submit follow-up reports twice a year to monitor the use of such exceptions."

The Incheon official said there had been no instructions from FIBA regarding the hijab.

"FIBA informed me they had not released a statement regarding possible changes yet," the official added.

Qatari player Amal Mohamed A Mohamed said they had been assured they would be able to wear the hijab before they came to the Asian Games, which are being run under the slogan: "Diversity Shines Here".

"Before attending the Asian Games, we were told that we would be able to participate in matches by wearing a hijab," she said. "However, the organisers of the Asian Games said to us that players with the hijab cannot play today's match.

"Since we can't take that off to take part in the match because of our religion, we just forfeited the match with Mongolia."

Mohamed said she was confused about why the scarf had been banned.

"I just don't understand why we're not allowed to play with the hijab. I don't think the hijab is dangerous, and negatively influences the match or other players," she said.

"We've attended many international competitions in Indonesia and China. Therefore, we will not attend any games in this Asian Games unless the officials change their decision."